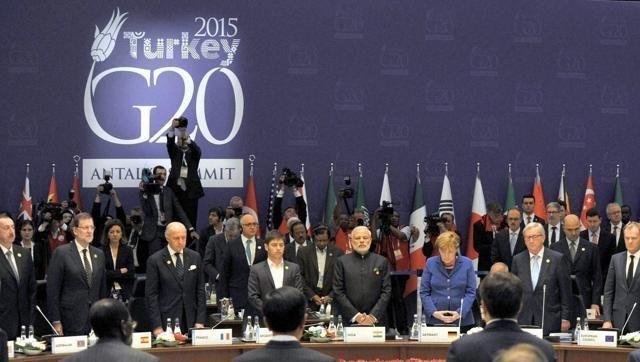 Prime Minister Narendra Modi joined world leaders on Sunday to seek urgent and united efforts to combat terrorism even as he pledged solidarity with France after a rash of deadly attacks in Paris killed nearly 130 people.

The fight against the Islamic State, which claimed responsibility for the Paris carnage, has dominated the discourse at the G20 Summit in the coastal city of Antalya, and leaders of the grouping are expected to adopt a resolution calling for a more comprehensive approach to tackle terrorism.

“Today, we are meeting (in) the tragic shadow of dreadful acts of terrorism, united by a sense of shock, pain and outrage,” Modi said in his intervention during a session on development and climate change.

He also referred to recent bombings in Ankara and Lebanon and the crash of a Russian airliner in Egypt that claimed 224 lives and said terror “extracts a huge economic cost and threatens our way of life”. Militants linked to the IS have claimed they brought the Russian plane down.

“(Terrorism) calls for a comprehensive global response. Combating it must be major priority for G20,” he said.

Speaking earlier on the sidelines of the summit, Modi pitched for united efforts to fight terrorism while condemning the violence in Paris.

“The entire humanity must stand together as one against terrorism. The need for a united global effort to combat terrorism has never been more urgent. This must also be a priority for BRICS nations,” he told a meeting of leaders from the group of five developing countries ahead of the G20 Summit.

US President Barack Obama condemned the Paris killings and a double suicide bombing in Turkey’s capital last month that killed 102 people as attacks “on the civilised world” and vowed to “redouble our efforts” to eliminate the IS network.

“We stand in solidarity with France in hunting down the perpetrators of this crime and bringing them to justice,” he said after talks with Turkish President Recep Tayyip Erdogan.

Obama’s statement came on a day a suspected IS militant blew himself up in southeastern Turkey near the Syrian border during a police raid, injuring five officers.

Erdogan said the agenda of the annual G20 summit, which traditionally focusses on economic issues and global financial stability, was now “very different” given the massacre in Paris.

“I believe that our stance against international terrorism will find its expression in a very strong, tough message at the G20 summit,” he said.

UN Secretary General Ban Ki-moon warned the world community its response to the Paris attacks should be robust but must remain within the rule of law, while he promised to soon submit to the UN General Assembly a comprehensive plan to deal with violent extremism and terrorism.

“Terrorism is a threat to all humankind. As we have seen over the years with grim regularity, no country, and no city, nobody is immune,” he said during a news conference. “At this time of heightened tensions, I caution against actions that would only perpetuate the cycle of hatred and violence.”

World leaders, including Modi, observed a minute’s silence at the G20 Summit to pay tribute to the victims of the terror attacks in Paris and Ankara at the request of President Erdogan.

The two-day summit was to discuss terrorism during a working dinner on Monday but Friday’s attacks in Paris brought the issue to the centrestage at the very beginning.

The resolution on terrorism after the G20 talks, which will be separate from the main declaration, is expected to seek faster implementation of the Financial Action Task Force’s recommendations to stop individuals sending money to groups such as the IS and to tackle the black market for oil that is seen as key to the group’s funding.

It is also expected to prevent terrorists from exploiting technology, communications and resources to incite terrorist acts, including through the internet.