First Sikh Sworn-In As Police Officer In US City 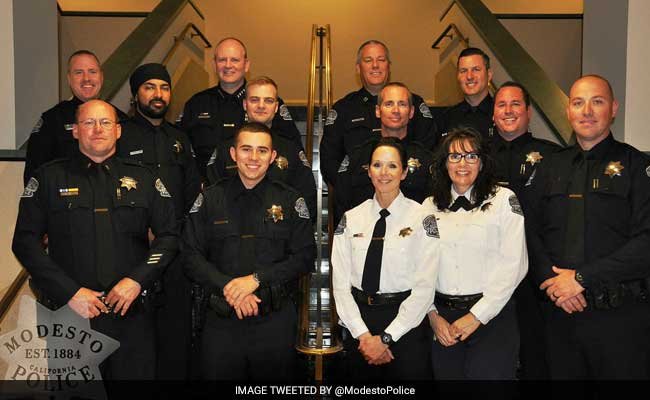 SAN FRANSISCO:  A 28-year-old Sikh man has been sworn-in as the first officer from the community who can wear his turban and beard on work despite grooming policy that requires officers to be clean shaven in the Modesto Police Department, California.

Varinder Khun Khun, who was born in India, graduated from the Napa Police Academy on June 11 along with two other officers. He is one of 33 officers hired by the department so far this year, The Modesto Bee reported.

“I’ve never seen police officers wearing a turban before; I didn’t know if I would get a chance (to be a police officer)… I am thankful for the department for giving me the opportunity,” Khun Khun said before the swearing-in ceremony in Modesto.

The Modesto Police Department’s grooming policy requires officers be clean shaven, allowing only for a mustache that extends to the edge of the lip.

Khun Khun approached Police Chief Galen Carroll a year ago about applying for the job and the requirement that he have a beard and wear a turban, it said.

“I told him that that didn’t matter, that we would make accommodations for his religious beliefs and that, more importantly, we were looking for people with high character standards and he would be an addition to the Police Department as a segment of the community that is not represented in the Police Department,” Carroll said.

“You want to have a police department that mirrors the community as much as possible. When you call an officer and nobody looks like you… you don’t feel like they can understand you or relate to you, so it is important to have that so you build stronger ties with the community,” Carroll added.

In April, three Sikh US Army enlistees won permission to wear beards and turbans after filing federal lawsuits that seek to force the Pentagon to accommodate those who wear beards for religious purposes.