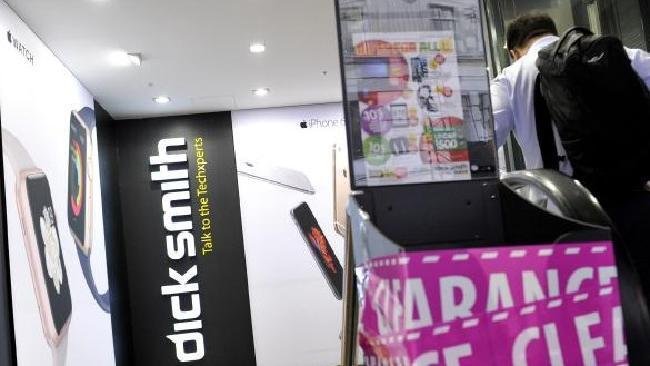 STRUGGLING Aussie retailer Dick Smith is going out with a bang, announcing a fire sale across 301 stores in Australia and New Zealand when doors open this morning.
As staff come to grips with Thursday’s announcement that receivers have been appointed to carry out closures over the next eight weeks, they can also expect a rush of bargain-hunters keen to clear shelves at bargain basement prices.
In a letter obtained by Business Insider, sent to almost 2500 staff impacted by the shut downs, receiver Ferrier Hodgson outlined the sale process and controlled closure.
“Now that all avenues for a sale of the Dick Smith business in Australia and New Zealand have been exhausted, the receivers and managers have no option but to commence a controlled closure program,” the letter reads.
It advises the Move airport outlets will remain open and staff will be given “as much notice as possible” before their store shuts its doors for the final time.
The sale, according to the letter, will begin on Friday. Prices of most items are expected to be reduced by at least 20-40 per cent, some will be slashed further. It comes more than a month after the business fell into voluntary administration and began desperately searching for a buyer. It was revealed in January that the company was facing debts of $400 million.
Consumer advocacy group Choice said the fire sale appears on the surface to be a win for customers, but that’s not necessarily the case.
“Often, fire sales aren’t great for consumers,” spokesman Tom Godfrey told news.com.au. “I’d advise people to be careful. While it seems appealing, you’re essentially foregoing your consumer rights.

“When this thing goes under, those who’ve made purchases will be at the end of a very long line of creditors (if something goes wrong).”

He said Dick Smith has already left “a trail of destruction” and consumers should be wary of getting caught up in it. His advice? Target name-brand product such as Apple and Samsung, because at least they are protected by a manufacturer’s warranty, and avoid all Dick Smith branded items.
Business and technology website Lifehacker offered some tips for consumers. They said a number of products will be reduced by more than 40 per cent, but some items and brands will be excluded.
Stores have been instructed not to hold stock for consumers or staff. During its last fire sale in December, employees were accused of hoarding items, including TVs and MacBooks.
At that time, the electronics retailer offered discounts of up to 80 per cent on unwanted stock, but furious customers complained staff were keeping the best items for themselves.
Customer Jordan Nash said he “openly saw an employee talking to his mate about [what he was doing]. Bragging about it was more important than helping a potential customer, it seems.”
Jamie-lee Taylor-Manzanares wrote: “Would be nice if all your staff didn’t buy all the good deals and brag about it where us customers can hear them! Just like last time!”
On Thursday, entrepreneur Dick Smith blamed “greedy bankers” for the company’s failures and warned Harvey Norman boss Gerry Harvey could be next.
“If [he’s] not careful, he’s going to be next. I just reckon there’s no money in consumer electronics, that’s why I sold out 30 years ago. Gerry should realise that shortly.”
Mr Smith sold the business to Woolworths in 1982, which ran it until September 2012 when it was bought by private equity firm Anchorage Capital Partners for $94 million.