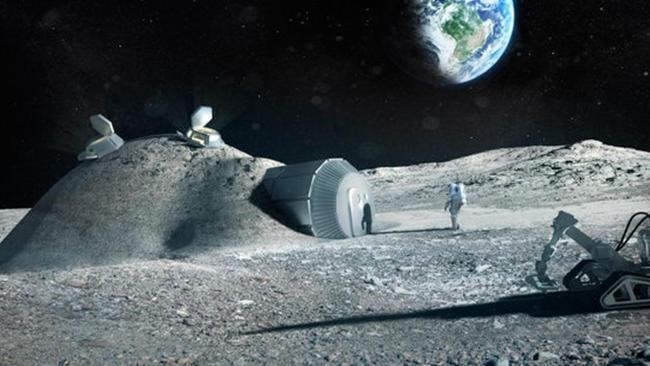 A MANNED base on the moon should become reality by 2030, according to the European Space Agency.

ESA chiefs say the planned “Moon Village”, which would be built by 3D printers, could help mankind explore the galaxy.

The plans say robots will land on the Moon and prepare the surface for human life, and come complete with a series of stunning concepts showing what the Moon base could look like.

Astronauts could then use the Moon as a space base to push on and explore more celestial bodies, such as Mars, NASA’s top priority target destination.

With water found by NASA on Mars, speculation about alien life is rife as the ESA confirmed their Moon colony dreams at a two-day conference entitled Moon 2020-2030 — A New Era of Coordinated Human and Robotic Exploration.

The conference, which featured 200 scientists and experts coming together to plan mankind’s next giant leap in space exploration, was held last month at the European Space Research and Technology Centre in Noorwijk, the Netherlands.

Kathy Laurini of NASA is optimistic that a European Moon base could act as a stepping stone for Mars-bound astronauts.

“The ESA space-exploration strategy sets the Moon as a priority destination for humans on the way to Mars,” she told Space.com.

“And the recent talk of a ‘Moon Village’ certainly has generated a lot of positive energy in Europe — [of] Europe playing a role in a global human exploration scenario.

“The timing is right to get started on the capabilities which allow Europe to meet its exploration objectives and ensure it remains a strong partner as humans begin to explore the solar system.”

The ESA tested the possibility of using Moon soil with 3D printers back in 2013 and devised a material which could be built into domes to defend residents against background space radiation.

“Our industrial team investigated if it could similarly be employed to build a lunar habitat.”

This development comes as experts grow increasingly optimistic about the chances of finding alien life and as manned forays into space are set to increase in frequency and ambition.