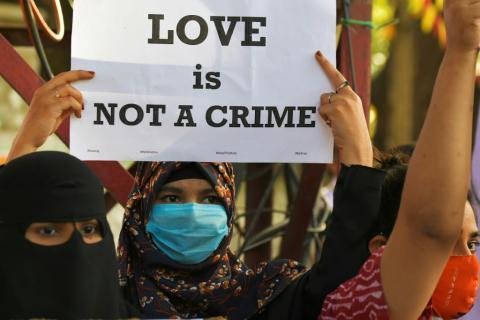 In India’s most populous state, the Hindu nationalist BJP government is on a mission against “love jihad”, the conspiracy theory that Muslims are luring Hindu brides with the aim of conversion and eventually national domination.

While interfaith marriage remains rare in the Hindu-majority nation, this zealous drive in Uttar Pradesh has taken the form of a new law that can land the couples in serious trouble.

A few weeks ago, when 22-year-old Muskan and her Muslim husband Rashid went to register their marriage in the town of Moradabad, he ended up in jail and the young woman in a state-run shelter home.

“They knew I was pregnant. They still made me work, clean the room, putting strain on my belly,” said Muskan, who went by Pinky when she was a Hindu.

“I knew I was losing my child.”


The couple’s “crime” was the alleged violation of an “unlawful conversion” ordinance promulgated last month in Uttar Pradesh by the local Bharatiya Janata Party government. It carries a punishment of up to 10 years in jail.

It sent a further chill through India’s 200-million-strong Muslim minority and defenders of the country’s secular traditions, who have raised alarm about the BJP’s policies since it returned to power in 2014.

Nowhere is Prime Minister Narendra Modi and the BJP’s alleged mission of “Hindutva” — Hindu hegemony — more in evidence than in Uttar Pradesh, a vast and economically backward state of 200 million people.

Its government is led by the saffron-robed, firebrand Hindu monk Yogi Adityanath, 48, a hardliner known for his inflammatory rhetoric against Muslims who has been touted by some as possible successor to Modi.

While there is no credible evidence of an organised mass attempt to convert Hindu women to Islam and bring about Muslim domination, the conspiracy theory is rife in Hindu nationalist circles
AFP / Manjunath Kiran


While there is no credible evidence of an organised mass attempt to convert Hindu women to Islam and bring about Muslim domination, the conspiracy theory is rife in Hindutva circles and Adityanath’s government has vowed to stamp out “love jihad” with the new law.

Falling foul of the vaguely worded legislation is not hard. Dozens of Muslim men have been arrested — for which police need no warrant — in just a few weeks.

Any relative of the bride can complain to the police, the men can be arrested on the slightest suspicion, and women are pressured into making incriminating statements, activists say.

This week, an 18-year-old Muslim was jailed after going out for pizza with a Hindu girl because her father complained to police, according to media reports.

He was booked for “inducing” the girl to elope with the intention to marry and forcefully change her religion — charges both teenagers deny.

Muslim boys do sometimes pretend to be Hindus, and there have been instances of kidnapping women — on both sides.

But many Hindu activists think the men are not acting alone but are part of a master plan, probably financed by India’s Muslim-majority neighbour Pakistan.

The ‘love jihad’ law has sent a chill through India’s 200-million-strong Muslim minority and defenders of the country’s secular traditions, who have raised alarm about the BJP’s policies since it returned to power in 2014
AFP / Manjunath Kiran


Believing “love jihad” is real “would be a laughable idea if it wasn’t so dangerous,” said activist Harsh Mander.

“What we’re witnessing… is the complete demolition of everything that the constitution promised.”

Other states governed by the BJP want to enact legislation similar to that in Uttar Pradesh.

Egging on the government and the police are militant Hindu groups, the most prominent being the Bajrang Dal, which is thought to have more than five million youth members nationwide.

It has been repeatedly accused of deadly sectarian violence, and is also known for hassling couples on Valentine’s Day, and intimidating Muslims and low-caste Hindus accused of slaughtering cows — which are sacred in Hinduism.

“Love jihad is a reality, it is a well-thought-out strategy deployed by Muslim boys to lure Hindu girls,” Ramji Tiwari, the Bajrang Dal chief in the city of Kanpur, told AFP.

Muslims, he claimed, are “hellbent” on one day outnumbering Hindus — currently they outnumber Muslims by almost six to one — in India by “trapping and brainwashing our girls”.

Bajrang Dal now conducts “awareness campaigns”, going door-to-door telling “our mothers and sisters that they should be wary of these smooth-talking men”.

The BJP’s new mission against “love jihad” is also a blow against the right of women to choose whom they marry and an attempt to ensure they remain in “traditional” roles, activists say.

“It’s the unholy trinity of patriarchy, caste and dominant religion that has always wanted to control women’s sexuality and freedom,” Vrinda Grover, a lawyer and rights activist, told AFP.

Muskan, meanwhile, is back with her in-laws, still suffering medical complications. She intends to stay with Rashid.

He and his brother spent two weeks behind bars before police released them as Muskan resisted pressure to incriminate him.

“I trust and love Muskan. I knew she wouldn’t make a statement against our love,” he told AFP.

“I only got to know about our baby when I got out.”