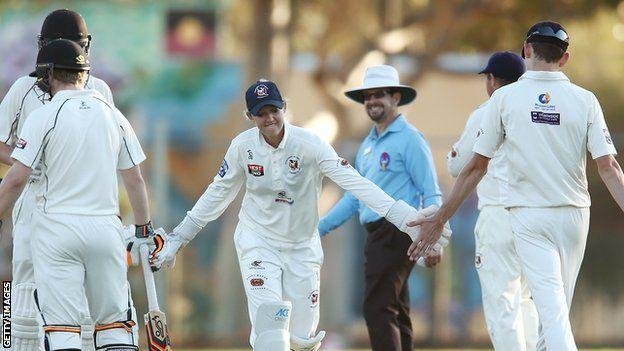 England superstar Sarah Taylor made her first grade debut for Northern Districts in Adelaide on Saturday, and made history in the process.

Taylor, a wicketkeeper-batter in the country for a stint with the BreezAir SA Scorpions in the Women’s National Cricket League, became the first woman to play in a men’s two-day A grade match in Australia.

Presented her cap by Northern Districts captain and former Australia ODI batsman Mark Cosgrove, Taylor had a long day behind the stumps as Port Adelaide made the most of being sent in, making their way to 3-227 by the close of play.

Taylor, who has played eight Tests, 98 One-Day Internationals and 73 Twenty20s for England, was listed to bat at No.8 in the season opener at Salisbury Oval but will have to wait for her opportunity at the crease.

Speaking with cricket.com.au on Thursday, the 26-year-old said she was “nervous and excited” about making her debut.

“I’ve always wanted to push myself and check where I’m at in terms of my cricket,” she added. “It’s going to take a bit for me to get used to the extra pace and bounce but I want to challenge myself and test where my cricket is at, to see if I can cope at that level.

“If I get any sledging, it’s a bit of respect because they’re treating me like one of the other players.”

Only Southern Stars pace legend Cathryn Fitzpatrick has previously played men’s top grade cricket in Australia, appearing in one Twenty20 for Dandenong in 2006-07.

Former Australian captain Karen Rolton featured in several B and C grade matches for Port Adelaide during the early 2000s.

It is not the first time Taylor, the second-ranked batter in women’s ODI cricket behind Southern Stars captain Meg Lanning, has lined up alongside men.

Two years ago, Taylor played for Walmley in the Birmingham and District Premier League – one of England’s strongest club competitions.

On her most recent outing with the bat, Taylor made an impressive 101 in the Scorpions’ first match of the season against the Lend Lease Breakers last weekend.