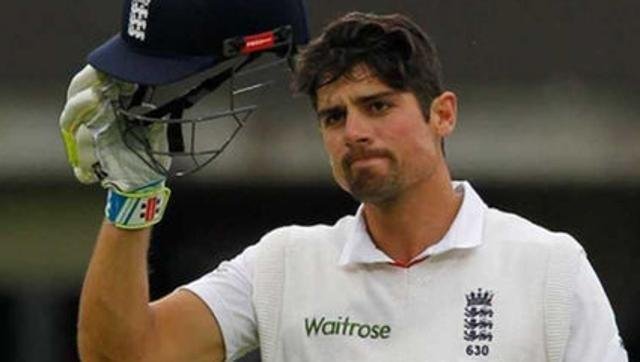 England captain Alastair Cook said on Wednesday that he was well aware that his looming membership of the 10,000 Test run club would be a significant landmark in an already successful career.

The 31-year-old left-handed opener needs just 36 more runs to become the first Englishman — and only 12th player overall — to score 10,000 runs in Tests and he will hope to get there during this week’s first Test against Sri Lanka at Headingley, which starts on Thursday. Once he gets there, he will also become the youngest to achieve that feat, overtaking the great Sachin Tendulkar .

“It would mean a lot and hopefully I can get there sooner rather than later so we can talk about something else,” said Cook, speaking at Headingley, Yorkshire’s headquarters in Leeds, northern England, on Wednesday.

“It’s a big milestone in terms of the people who have done it previously so it would be great to try and score these 36 runs. I’ve just got to put that to bed after this press conference and try and do what I’ve done in the previous 10 years, which is just try and concentrate on that ball coming down and nothing else.”

The last time England played Sri Lanka in a Test at Headingley, two years ago, was one of the low points of Cook’s career.

Sri Lanka, inspired by a brilliant hundred from captain Angelo Mathews — still their skipper — won a thrilling match by 100 runs off the penultimate ball of the game to secure their first Test series win in England.

Cook’s tactics were widely criticised and he pondered resigning the England captaincy.

But the Essex batsman decided to carry on and has since been rewarded with last year’s Ashes success and a series win in South Africa during England’s most recent Test series.

“It was a game of fine margins and Sri Lanka came out on top and thoroughly deserved it,” he said as he recalled the 2014 Test at Headingley.

“It was a real tough moment for me as a captain, there’s no doubt about that, but I’m glad I hung in there for what’s happened since.

“It’s probably taken me three years to feel comfortable in the job and hopefully I can carry on for a bit, and while I’m still enjoying it and while the guys are still responding I’m staying there.”

Sri Lanka are still getting used to life withour star batsmen Kumar Sangakkara and Mahela Jayawardene, who between them amassed more than 24,000 runs in Test cricket before they both retired from international duty last year.

“They’re irreplaceable but sides move on and evolve,” said Cook.

“Sri Lanka have got a history of punching above their weight and are really, really competitive, no matter what’s gone before.”