Emirates flight from India crash-lands in Dubai, all 300 on board safe 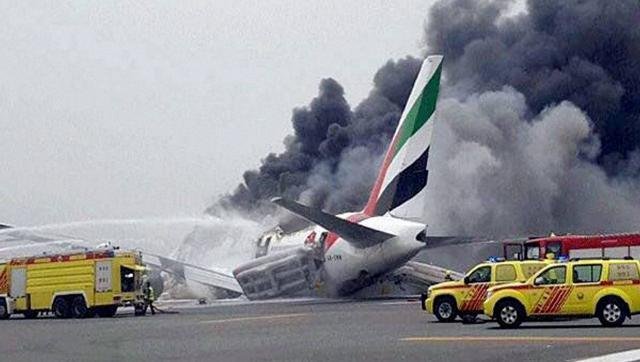 An Emirates flight from India with 300 people on board crash landed at Dubai’s main airport on Wednesday, sending black smoke billowing into the air and halting all traffic at the Middle East’s busiest airport. Authorities said all passengers were evacuated safely, but one firefighter was killed while fighting the flames.

There were 226 Indians in the flight.

The Dubai government’s official media office separately said that all passengers were “evacuated safely and no injuries have been reported so far.”

However, a Dubai-based firefighter died while putting out flames from accident, which was not related to security, the Emirates airline chairman said.

It said authorities were “dealing with the incident at the moment to ensure safety of all”. Around five hours after the incident took place, the media office tweeted that the airport, one of the busiest in the world in terms of international passengers, had resumed departure and arrival flights.

“Our main priority at this time is the safety and wellbeing of all involved and full co-operation is being extended to the authorities and emergency services managing the situation,” the carrier said.

The Boeing 777 departed Thiruvananthapuram at 10:19am and was scheduled to land at 12:50 pm local time, according to Emirates. The Dubai-based carrier said the incident happened at 12.45pm local time (845 GMT).

The aircraft involved in the incident, a Boeing 777, has been in the news in the past as well. It was the same make and model as Malaysia Airlines flights MH 370 and MH 17.