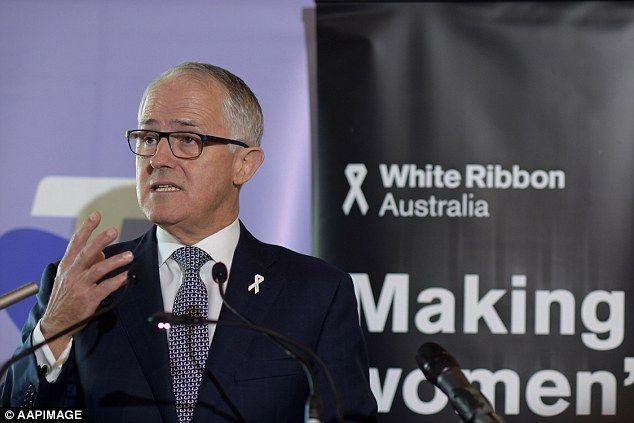 Prime Minister Malcolm Turnbull has promised to consider paid domestic violence leave as part of his White Ribbon Day address.
The move comes after Opposition Leader Bill Shorten pledged a Labor government would legislate for five days paid domestic and family violence leave.
Mr Turnbull on Wednesday said the leave proposal would be considered by the Productivity Commission as part of its review of the Fair Work system.

The Queensland and South Australian governments both announced on Wednesday that public servants suffering domestic violence will have access to at least 10 days extra leave.
Australian Chamber of Commerce and Industry chief Kate Carnell says while domestic violence is a scourge, small and medium-sized businesses should not be compelled to foot the bill.
‘Labor’s proposal … is not appropriate for small and family businesses whose circumstances are very different to those of publicly-listed corporations and public sector employers,’ Ms Carnell said.
She said such leave should be an option for businesses that can afford to offer it.
Mr Shorten said he appreciated the fact that companies such as Telstra, Virgin, Ikea and Blundstone already offered domestic violence leave.
‘I think most Australians are family people first and they will get the common sense of being able to say to their trusted employers: it improves productivity, it improves the retention rate of good employees and it will decrease absentees,’ he said.

The ACTU, which is seeking 10 days leave in a case it is taking to the Fair Work Commission, says the issue deserved bipartisan support.
Unions have already negotiated 860 agreements containing paid domestic violence leave with employers, covering almost two million workers.
‘A commitment to paid leave says to workers affected by domestic violence that they are supported and their job is safe,’ ACTU president Ged Kearney said.
The prime minister told parliament the plan to include such leave in the national employment standards had merit, but more research was needed.
White Ribbon Day is Australia’s only national, male led Campaign to end men’s violence against women, and has been formally running since 2007.
Globally, White Ribbon is the world’s largest male-led movement to end men’s violence against women it began Canada in 1991,and can now be found in 60 countries.