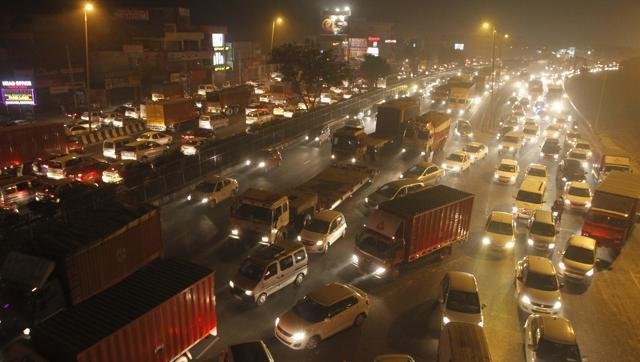 Key routes including the entire Ring Road were choked with vehicles on Monday when the Capital’s traffic problems were compounded by the 20,000 weddings, the highest this season, that were held.

“The traffic on many stretches was moving almost bumper-to-bumper while the vehicles were being regulated manually,” said a senior traffic officer.

Traffic was affected on NH-8 towards Dwarka Link road that houses a large number of wedding venues, and Gurgaon.

There was heavy traffic in the city’s south such as Mehrauli-Gurgaon Road, Mehrauli-Badarpur Road, Chhatarpur, Anuvrat Marg and Aurobindo Marg.

GT Karnal Road, Palla Bhaktawar Road – starting from Mukarba Chowk going towards Narela and Alipur, Peeragarhi Chowk, the Punjabi Bagh – Karmpura T-point and ring road on that side and Khajuri Chowk were affected in outer and west Delhi. Patparganj, Mayur Vihar and Shastri Park in east Delhi were also chock-a-block.

“There was heavy deployment of traffic personnel across the city. We deployed all the traffic inspectors on night duty in order to manage the situation and keep the traffic moving. The next few days will be heavy too,” said, Muktesh Chander, special commissioner of police (traffic).

The Delhi Traffic Police expect heavy traffic on these routes in the coming week too, especially on December 12, 13 and 14 when a large number of weddings are scheduled.

“Farmhouses were told to arrange for parking around their premises. Guests were asked to not take out processions on the main road leading to the venue, and instead take a service lane or an alternate walking route,” said, Chander.

Around 700 traffic policemen were deployed on these stretches to ensure marriage processions do not disrupt vehicle movement between 8PM and 1AM, said the official.

Tow trucks were stationed at each of these junctions to immediately remove any broken down or illegally parked vehicles to prevent jams, he added.