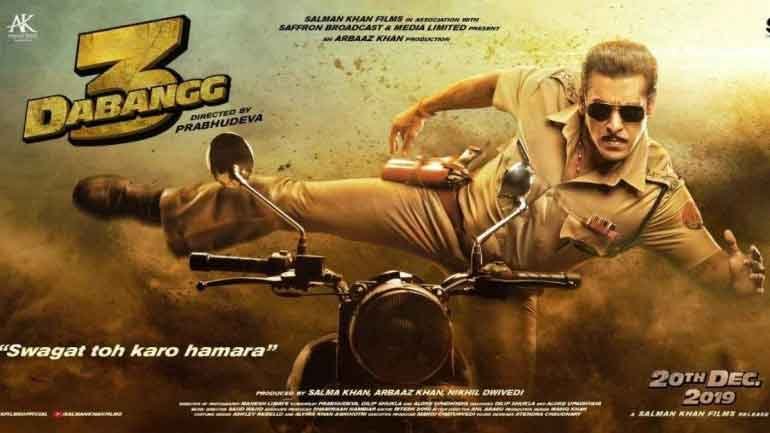 Marvel and DC have made a fortune with backstories of their most loved (and sometimes hated) characters. So, circa 2019, are we ready for one about Chulbul Pandey? Salman Khan ne bola toh of course we are.

Chulbul Pandey and his story moves from Laalgunj to Kanpur to Tundla, all in Uttar Pradesh, in the third instalment of the Dabangg franchise. Along with the locales, the directors and the respective flavours they add to each film have also changed – from Abhinav Kashyap to Arbaaz Khan to now Prabhudheva.

What hasn’t changed is Salman Khan’s dabanggai. If his subordinate asks for a promotion he still shoots at him so that he can claim sarkaari compensation. His toxic yet all-in-jest banter with bro Makkhi (Arbaaz Khan) is still on. And he still wastes err…invests, sorry, invests as much time as he can delivering punch lines pe punch lines before finishing off the bad guy. Sometimes, much to Rajjo’s (Sonakshi Sinha) peril.

But then, Chulbul wasn’t always like this. Just as Bhai’s fans made him the Bhaijaan that he is today, Bali Singh (Kichcha Sudeep) with little (pale, pasty-faced, Piranha-pout) help from Khushi (Saiee Manjrekar), made Chulbul.

Young Chulbul (we can tell you that’s not Salman’s real name but we won’t tell you how he got that name for that would be a major spoiler in the little bit of the story Dabangg 3 has is wooing Khushi, but is interrupted by a poster of Shah Rukh Khan and Dilwale Dulhania Le Jayenge on the wall behind her. In a dream sequence with Khushi, we see them recreate the train-chase scene from the DDLJ (not the one with Bauji, the other one), and once they’re on the train, Salman does what looks like a recreation of Chaiyya Chaiyya.

Present-day Chulbul and Rajjo’s dance duet suddenly have them mimic Salman’s Maine Pyar Kiya step, shouldering pigeons and strutting like one would if they had a shoe bite. His house help’s phone rings and Mera Hi Jalwa from Wanted (2009), is the ringtone.

At one point Sohail Khan appears on screen! And in another, we have Rajjo mouth “Khaamosh!”

In all this, if you fail to look at characterisation, screenplay, coherency, logic, or the fact that Vinod Khanna’s brother Pramod Khanna has reprised the role of Prajapati Pandey after the former’s death, and has been made to look uncannily similar to him, it’s not your fault.

Some films are experiences, and therefore, shouldn’t be restricted with star ratings, or discussions about the film’s merit. A Salman Khan film, in this context, is a rollercoaster ride. You buy a ticket, stand in line, take your seat, buckle yourself up, and pray to the almighty that you don’t puke on thy neighbour.