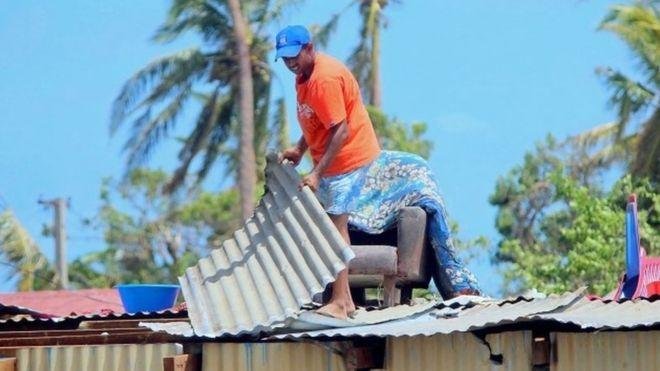 The number of people killed in the cyclone that hit Fiji at the weekend has risen to 29, with officials warning the clear-up could take months.

About 8,500 people are still sheltering in evacuation centres.

Cyclone Winston has flattened many buildings in parts of the main Viti Levu island and Koro islands, Fijian officials said.

It has been described by the Fiji Broadcasting Corporation as the worst to ever hit the country.

Government spokesman Ewan Perrin told Radio New Zealand that the houses of 2,000 families who lived on Koro island had been “pretty much flattened”.

Eight bodies were found there on Monday.

Rescue workers warned that the death toll could rise further as some of the worst-hit outlying islands have yet to be reached.

“We’re still trying to get people on the ground in these areas,” Mr Perrin was quoted by the AFP news agency as saying.

“In some places people are going to be displaced for months because they’ve lost everything,” he added.

Officials say the priority now is to provide water and shelter to Fijians as they begin rebuilding their homes.

Many parts of the country remain without power.

However, officials said the destruction could have been far worse had the storm not changed direction at the last minute, sparing the capital Suva its full impact.

The government has declared a state of emergency and called on private companies to help provide transport and relief supplies.

Officials had also put in place a nationwide curfew, giving police extra powers of arrest, but it was lifted on Monday.

Schools have shut for a week, but the main airport has reopened to receive humanitarian supplies and allow tourists to leave.

Australia and New Zealand have authorised the release of emergency aid supplies held in Suva.