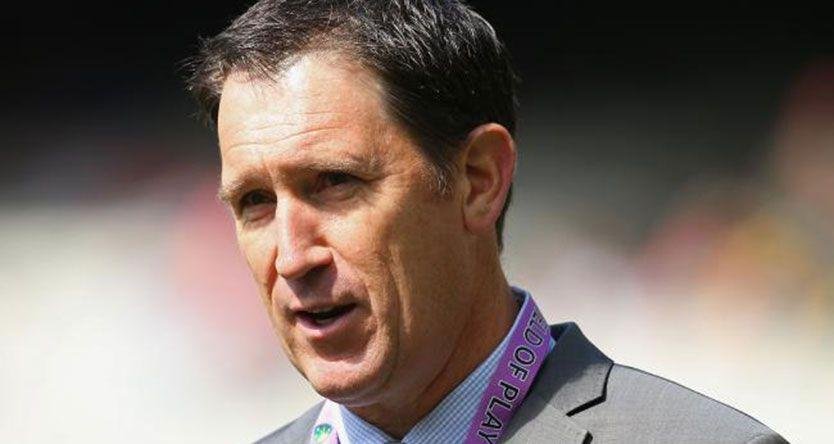 CRICKET Australia has launched an audacious bid to have the SCG promoted up the batting order in the state’s stadium funding war.
With the NSW Government expected to hand down the final allocation of its $1.6 billion stadiums package inside the next month, CA chief executive James Sutherland has written to Premier Gladys Berejiklian to highlight the SCG’s fall from grace as a Test venue.
In a letter penned on October 17, exclusively obtained by The Daily Telegraph, Sutherland lobbies for the redevelopment of the dated Brewongle-Churchill and O’Reilly Stands (which make up 60 per cent of public seating), and alerts the Premier to the fact that in terms of “public facilities and amenities” the iconic stadium is now ranked No. 5 out of the 6 Test grounds around the country.

It’s understood AFL chief executive Gillon McLachlan has also joined Sutherland in personally writing to the Government to push the funding claims of the city’s two oval venues the SCG and Spotless Stadium as mass speculation points towards ANZ and Allianz Stadiums being the high priorities in provisions for the billion dollar stadium network.
The bold argument being levelled by Cricket Australia and the AFL to get their slice of the pie is that the SCG is the only ground in Sydney that plays host to two clubs that regularly draw 30,000-plus crowds in the Sydney Swans and the Sydney Sixers.
Sutherland’s letter also lobbies the Government for a second cricketing “hub” at Sydney Olympic Park to fix NSW Cricket’s facilities crisis.
The Daily Telegraph understands it would take an estimated $400 million out of the $1.6 billion pool to facilitate the requests CA is making for urgent facility upgrades and ventures at the SCG and Sydney Olympic Park.

Amid all the talk about Sydney’s rectangular stadium deficiencies, Sutherland has implored the Premier to not forget about cricket.
“I am writing further to your recent meetings with Cricket NSW to outline Cricket Australia’s priorities in relation to planned NSW Government investment in its stadiums network and Cricket Australia’s support for the plans developed by Cricket NSW to improve cricket’s ageing and inadequate high performance training and administration facilities in Sydney,” writes Sutherland.
“… Cricket’s specific stadiums priorities are:
“Completion of the SCG, including redevelopment of the dated Brewongle-Churchill and O’Reilly Stands, which constitute more than 60 per cent of the public capacity at the SCG. With the launch of Perth Stadium, as well as recent developments at other major cricket venues, the public facilities and amenities of these stands now rank 5 of 6 of the Test cricket venues in Australia (with Hobart’s Bellerive Oval ranked 6).

“In addition, both of these stands were constructed prior to the neighbouring Allianz Stadium where significant safety and compliance issues have been recently identified by the SCG Trust, due to the venue’s age and condition. We expect there are similar issues with the Brewongle-Churchill and O’Reilly Stands.”
The NSW Government say they aren’t dismissing the claims of any of the major sports to lobby them directly, and will go back and brief the major stakeholders when final decisions are made.
“NSW deserves the best sports stadiums in the country. We need world class sporting facilities to attract national and international events. The stadiums plan will be an investment in a network of stadiums,” said a Government spokesman.
“We’re now working hard to get the sequencing in construction that will result in the best outcome for sports and fans.”
Sutherland points to the 380,000 fans that attended cricket at the SCG and Spotless last season.

However, Cricket Australia is just as concerned about a facilities crisis in Sydney, where there are limited net and practice facilities for NSW, the state that makes up 55 per cent of the players in all Australian teams.
Women’s players are regularly unable to train on turf wickets at the SCG due to the lack of space, and Cricket NSW is proposing a model called “two clubs two hubs” — a push for centre of excellence style facilities at both Moore Park and Sydney Olympic Park, which would mimic the set-up in Melbourne where there are facilities at the MCG and Junction Oval.
Sutherland stressed the importance of this being given sequence priority over any planned redevelopment of Moore Park’s Allianz Stadium, which could impact upon existing nets at the SCG.
“… It is critical that any new and improved training facilities are delivered at both Moore Park and Sydney Olympic Park prior to any potential impact on cricket’s current facilities at Moore Park in the event of a redevelopment of Allianz Stadium,” he wrote.
Originally published as Cricket Australia: Fix our SCG shame