COP21: Poor countries fear being ‘left behind’ in rush for deal 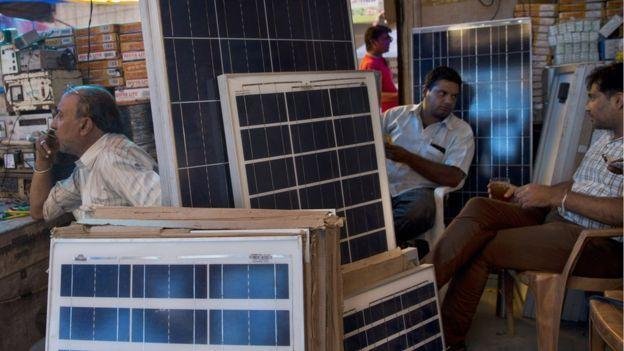 A critical UN conference aimed at agreeing a new global approach to climate change is set to open in Paris.
The meeting, known as COP21, will see negotiators from 195 countries attempt to finalise a new treaty over the next two weeks.
Political leaders from 147 countries will address the conference throughout Monday.
But the poorest countries say they fear being “left behind” in the push to agree a deal.
The French government will officially take over the running of the talks during the opening ceremony on Monday.
Thousands march for climate change
Police have locked down the conference centre in Le Bourget, closing roads in the area amid strict security for the leaders’ visit.
Presidents and prime ministers will address the gathering amid a growing sense of optimism that an agreement can be secured.
“It will be the turning point, which is what the world requires,” said French Foreign Minister Laurent Fabius at a news conference over the weekend. Mr Fabius will chair the conference until it reaches a conclusion.
Boost for solar
The leaders, who will only stay at the meeting for one day, are likely to make a number of significant announcements during the day to boost the fight against rising temperatures.

France and India will announce a global alliance that aims to bring together 100 solar-rich countries in tropical regions to rapidly expand the availability of electricity from the Sun.
There are also expected to be announcements on funding for renewable energy research.
But among the warm words and good intentions, there are growing concerns among the very poorest countries that their interests might be sacrificed in the clamour for compromise.
Most of the discussions here will revolve around a new deal that would limit global warming to 2C.
Assessments of the more than 180 national plans that have been submitted by countries suggest that if they were implemented the world would see a rise of nearer to 3C.
However, the 48 members of the least developed countries (LDC) group at these talks say that for them, anything more than 1.5 degrees would be catastrophic.
“For the LDCs, economic development, regional food security, ecosystems, and the very survival of their populations and livelihoods are at risk if talks aim only for a 2C world,” said Giza Gaspar Martins from Angola.
“The heads of state will be in Paris to set the tone for the negotiations. We renew our call for an ambitious, robust and binding climate deal that does not leave behind the most vulnerable among us.”
While the arrival of the leaders will give a significant boost to the conference, the practical difficulties of securing a deal have not gone away.
‘Differentiation’ issue
At present the negotiating text runs to more than 50 pages of dense text, filled with brackets, indicating disagreement.
Teams of negotiators actually began the work on Sunday conscious of the fact that so many issues remain unresolved.
The hope is that, by the end of this week, a new draft agreement will be ready for environment ministers to haggle over during the second half of the conference.
One of the biggest differences is said to be over what’s termed “differentiation” in the talks.
The US and other wealthy countries object to the fact that in these negotiations, a country is determined to be developed or developing based on its wealth when this body was formed back in 1992.
They argue that any new deal must accurately reflect the current position, meaning that a larger number of countries would have to share the burden of cutting carbon.