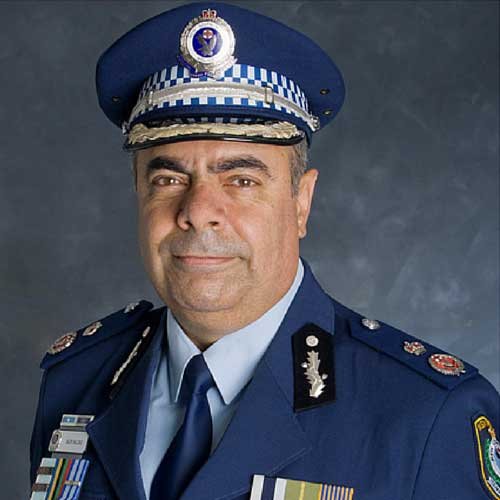 Police Commissioner Andrew Scipione has paid tribute to Deputy Commissioner Nick Kaldas’s 34-year career with the NSW Police Force. Nick has been Deputy Commissioner Field Operations since 2011 having been previously appointed to Deputy Commissioner Specialist Operations in 2007.
“I have spoken with Nick today and wished him well. He has had an outstanding career and I would like to take this opportunity to thank him for his dedication to this organization. “Nick has been a very proud detective and those skills have been the bedrock of a very varied career that has seen him lead commands such as the Homicide Squad and the Gangs Squad.

“Additionally as Corporate Spokesperson for Cultural Diversity, Nick has built lasting and positive bonds with the state’s multi-cultural community and I know he’s very proud of those achievements.
“I want to acknowledge his significant contribution and dedication to the police force and the wider community. Having worked alongside Nick for many years I now wish him and his family all the very best with whatever path they choose for the future.”

Senior police are encouraging people to take personal responsibility following a concerning number of alcohol-fuelled incidents in Sydney at the weekends. Officers across the state responded to numerous violent incidents, including dozens in Sydney, where alcohol was a major contributing factor.

“The events of this weekend have demonstrated that there are still people who cannot exercise restraint when drinking and have either injured themselves or harmed others,” Assistant Commissioner Fuller said.

“We could have avoided almost all of these incidents if people used better judgement and drank responsibly. “Everyone has the right to go out in Sydney at night, have a good time and not be accosted by drunks.”

Police will bolster the response to alcohol-related violence and anti-social behavior in the Sydney Entertainment Precinct and surrounding areas by extending Operation Compello. Additional officers from across the Central Metropolitan Region will be assisted by specialist officers from Alcohol and Licensing Enforcement Command (ALEC), Police Transport Command (PTC), Public Order and Riot Squad (PORS), Mounted Unit and Dog Unit for the high-visibility operation.

As part of Operation Compello, police will work closely with the Office of Liquor, Gaming and Racing (OLGR) to focus on enforcement of the Liquor Act to ensure licensed premises are adopting good management practices.

Assistant Commissioner Fuller said for officers in Central Metropolitan Region, a targeted operation like Compello is not an unusual occurrence; it is an everyday part of policing Australia’s largest city, and will be bolstered to send a clear message this is not normal behavior.

“The NSW Police Force conducts numerous similar operations in and around Sydney, particularly in the summer months, and with the current consistent warmer weather, we are seeing more people out enjoying their weekend nights in Sydney,” Assistant Commissioner Fuller said.

“We want to see people out having fun, but we are extremely concerned by the level of intoxication we are seeing in some people every night.

“Unfortunately, anyone can turn into an offender or a victim of crime after consuming too much alcohol.
“It’s time to start taking responsibility for your actions. Know your limits – drink sensibly, plan ahead and think about others. “Let’s turn good intentions into action. You may save a life by acting responsibly – and it might be yours,” Assistant Commissioner Fuller said.