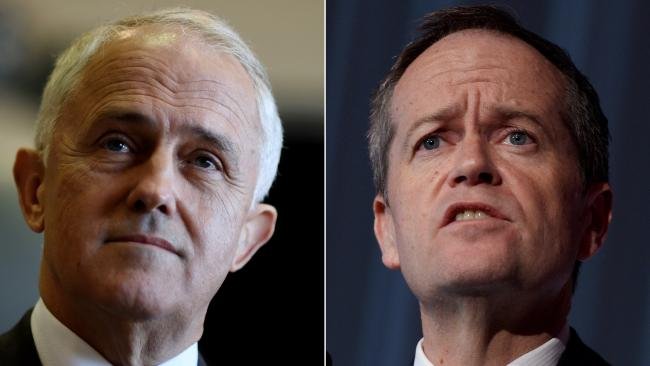 MALCOLM Turnbull says he is confident the Coalition will form a majority government in the next parliament, despite huge losses for his party that have left the result on a knife-edge.

The Prime Minister appeared about 12.20am to announce the news to supporters in Sydney.

“I can report that based on the advice I have from the party officials, we can have every confidence that we will form a Coalition majority Government in the next Parliament,” he said.

He acknowledged that it was a “close count” and nearly 30 per cent of votes had yet to be counted. Counting will resume on Tuesday. That will include prepoll and absentee votes, as well as those still left to count in undecided seats. The seats in doubt are Capricornia, Chisholm, Cowan, Dickson, Dunkley, Forde, Gilmore, Herbert, Hindmarsh, La Trobe and Petrie

“The commissioner advises us there will be no more counting tomorrow or on Monday,” Mr Turnbull said. But postal votes will be counted on Tuesday.

“The final results in terms of seats may not be known until then,” he said.

But Mr Turnbull pointed out the close vote was not unknown in the parliamentary history of the Liberal party.

“As my distinguished predecessor, mentor, former boss John Howard well remembers … we have seen this before in 1998.”

Opposition Leader Bill Shorten appeared in front of a cheering crowd about 11.30pm after a night of “erratic results” that suggested a hung parliament was a possibility.
Addressing the party faithful at his Melbourne campaign party, Mr Shorten said: “Friends, we will not know the outcome of this election tonight. Indeed, we may not know it for days to come.
“But there is one thing for sure — the Labor Party is back.”
THE RESULTS
Australia is facing the prospect of a hung parliament or a narrow Coalition victory.
With 96.94 per cent of the first preference vote counted, there has been a 3.22 per cent swing against the Coalition in the two-party preferred count, according to the Australian Electoral Commission.
The Coalition is sitting on 50.04 per cent of the two-party preferred vote, compared to 49.96 per cent for Labor.
At 1:40am, there were just 8124 votes separating the two major parties. The Coalition was leading on 4,929,311 votes compared to Labor on 4,921,187 votes.
According to the ABC, there are eleven seats that could decide the election result.

The ABC is predicting the Coalition to win 67 seats, equal to 67 seats for Labor. The Greens are expected to retain one seat, the Nick Xenophon Team will pick up one seat and three independents are likely to be elected.

Independent Andrew Wilkie has been re-elected in Denison, Cathy McGowan retained her seat of Indi against the Liberal candidate Sophie Mirabella and Bob Katter will also be back.

The winning party needs 76 seats in the House of Representatives to form government.

The Liberal party is ahead in Dickson, Dunkley, Gilmore, La Trobe and Petrie, while Labor is ahead in Capricornia, Chisholm, Cowan, Forde, Herbert and Hindmarsh.

Batman, where Labor’s David Feeney has been locked in a close battle with Greens candidate Alex Bhathal, has shifted constantly throughout the night but is expected to remain a Labor seat.

While the result has not yet been called, commentator Andrew Bolt has already suggested Malcolm Turnbull should resign.

However, broadcaster Alan Jones said he didn’t think the party should be considering a change of leader. “I hope there’s not another challenge,” he said, adding people had had enough.

When Mr Abbott’s former chief of staff Peta Credlin was asked about Bolt’s comments that Mr Turnbull should resign, she said: “I wouldn’t go that far”.

ABC veteran journalist Barrie Cassidy said the count was now advanced enough that Labor would not be able to win government.

“The issue is whether or not Malcolm Turnbull can govern in a majority or minority.”

Cassidy said earlier he thought Australia could be facing a hung parliament.

“More likely than not, we’ll have a hung parliament,” he said.

However, Liberal senator George Brandis told Sky News he thought the Liberals would eventually claim the seats in doubt and would be able to form government in its own right.

The Coalition is predicted to win 67 seats and is ahead in five others. It needs 76 to win government.

Earlier Liberal heavyweight Peter Costello said on Nine: “I don’t believe that Labor can win this election, I think the Coalition will win it. I don’t think it will be a hung parliament.

“I’m saying that the Liberal Party will be returned on a substantially reduced majority.”

ABC election analyst Antony Green said the government “has its nose in front” but there were still many seats in doubt. He described the swings across the nation as “erratic”.

“It’s an election where we’ll be here all night,” he said.

Liberal senator Arthur Sinodinos said he was not sure there would be a result tonight.

Although the Greens was hoping to pick up a number of seats it looks like they have fallen short in areas such as Wills, Higgins and Grayndler.

“I’d like to say thank you to all my voters and anyone who’s said anything nice about me,” he said during an appearance on Channel 9.

But the Greens’ only MP Adam Bandt did manage to retain his seat of Melbourne.

Nationals leader Barnaby Joyce has claimed victory in his rural seat of New England, successfully fighting off a challenge from his independent nemesis Tony Windsor.

While he did not concede defeat, Tony Windsor appeared before the media about 9pm and said he was disappointed it appeared he probably wouldn’t win.

Nationals MP Luke Hartsuyker also looks likely to retain his seat of Cowper, where he faced a challenge from independent Rob Oakeshott.

According to the ABC, Labor’s Mike Kelly is likely to pick up Eden-Monaro, which is a bellwether seat, and usually goes with the party that wins government.

Labor is also claiming the inner-west Sydney seat of Barton as a win for Linda Burney. The former NSW Labor state MP is the first indigenous woman to win a seat in the lower house.

Mr Gosling told ABC he thought the Coalition had not kept its promises on housing, health and education.

The results see some of Mr Turnbull’s backers unseated including Wyatt Roy in Longman and Fiona Scott in Lindsay.

The Liberals did manage to pick up Chisholm and retained the marginal Victorian seat of Corangamite.

The Nationals looks like it will take Murray from their Liberal colleagues.

Former prime minister Tony Abbott has claimed victory in his seat of Warringah.

“Notwithstanding a difficult night, there will still be I believe, a good, strong Coalition government in Canberra,” Mr Abbott said.

He praised NSW Premier Mike Baird and state conference president Walter Villatora before ending with a mysterious comment: “And wouldn’t it be nice to see a bit of democracy inside our party?”

Incumbent independent MP Andrew Wilkie has also claimed victory in the Tasmanian metropolitan seat of Denison. With about 35 per cent of the vote counted, the Hobart-based politician held a two-party preferred result of more than 68 per cent.

So far one of the most significant results is that Pauline Hanson is likely to pick up two seats and Jacqui Lambie is likely to be returned, based on provisional results.

Nick Xenophon’s party already looks to have secured close to three seats, while broadcaster Derryn Hinch is close to getting a seat.

The Channel 9 exit poll says the election is too close to call, so the 2016 federal election could go down to the wire.

The 7News ReachTEL exit poll of more than 3000 voters predicts the Coalition maintaining its 51-49 lead over Labor.