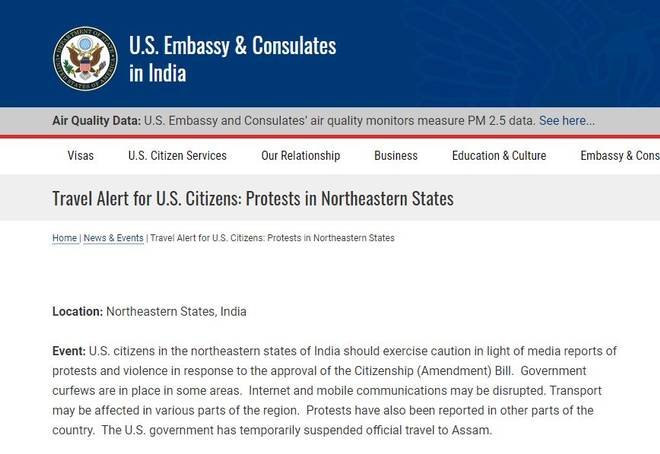 France, Israel, the U.S. and the U.K. have issued travel advisories for nationals travelling to India in view of the ongoing protests against the Citizenship Amendment Bill passed in the Parliament.

In a statement issued by the Foreign and Commonwealth Office, the United Kingdom has urged visitors to the northeast to avoid “all but essential” travel and “monitor local media” for the latest information about the circumstances around them.

The U.K. also asked citizens to avoid all travel to Jammu and Kashmir, Ladakh and all areas (except Wagah) near the border with Pakistan.

The U.S. also asked citizens to to “exercise caution” in the context of protests and violence against the passing of the Citizenship Amendment Bill (CAB). “The U.S. government has temporarily suspended official travel to Assam,” the U.S. has announced.

The French and Israeli governments have also urged their citizens to stay alert while travelling in India.

The advisories were issued after the office of the High Commissioner of U.N. Human Rights body expressed concern saying that the CAB was “fundamentally discriminatory in nature”. These comments have further amplified the concern about the situation in the northeast, which prompted cancellation of the India-Japan summit to be held in Guwahati from December 15 to 17.