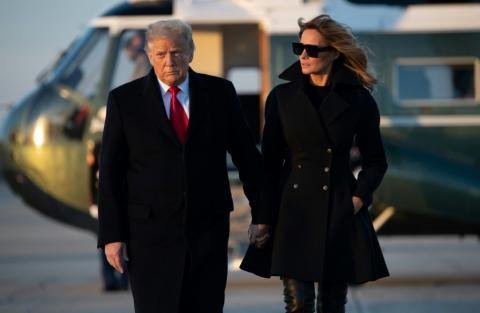 Hundreds of millions across the world celebrated pared-down Christmas festivities on Friday due to coronavirus restrictions, as Pope France appealed for people to show “fraternity” faced with crises aggravated by the pandemic.

“At this moment in history, marked by the ecological crisis and grave economic and social imbalances only worsened by the coronavirus pandemic, it is all the more important for us to acknowledge one another as brothers and sisters,” Francis said in his traditional “Urbi et Orbi” message.

Donald Trump and his wife Melania left Washington to spend Christmas in Florida, after his shock rejection of a massive coronavirus relief package passed by Congress
AFP / SAUL LOEB

The pontiff, who just celebrated his 84th birthday, gave his eighth Christmas message “to the city and the world” by video from the apostolic palace, to prevent a crowd from gathering in St Peter’s Square.

The battle to halt the pandemic, which has claimed more than 1.7 million lives, is far from over despite the launching of mass vaccine campaigns.

Thousands of hauliers are stuck in the UK, cut off by travel restrictions brought in because of a new coronavirus variant discovered there
AFP / JEAN-FRANCOIS MONIER


World Health Organization chief Tedros Adhanom Ghebreyesus said in a video message that “vaccines are offering the world a way out of this tragedy” but one that will “take time”.

Tedros hailed the “heart-wrenching sacrifices” millions were making by staying away from loved ones on Christmas Day, adding that “we must not squander their sacrifices” as he called for people to keep up infection control measures.

This year mass in Bethlehem, which Christians believe is the birthplace of Jesus Christ, will be held online with no participants
AFP / JAAFAR ASHTIYEH


Europe, where a new strain of coronavirus believed to spread much faster has emerged in Britain, on Friday passed 25 million confirmed cases.

Last week it became the first global region where more than 500,000 people have died of the virus.

Germany has been forced to cancel its famous Christmas markets, as countries around the world grapple with coronavirus restrictions during the festive period
AFP / STEFANIE LOOS

“It really is heartbreaking to see,” said Park Jae-woo, a member of the Yoido Full Gospel Church in Seoul which would usually expect up to 10,000 worshippers, but on Friday was only able to welcome 15 staff and choir members.

A recent outbreak in Sydney, Australia, means residents are limited to all but the smallest of Christmas gatherings
AFP / Steven Saphore


And in Catholic-majority Philippines, services were rocked when a 6.3-magnitude earthquake struck the country, capping off a troubled yuletide already muted by bans on parties and carol singing.

“Sad, very sad. Seeing everyone in masks, even the priest and altar servers, reminded me that the world as I know it is not the same,” said Manila resident Kyen Quimpo Mallonga after watching Christmas Eve mass on television instead of attending her local church.

Santa Claus begins his journey from Rovaniemi in Finnish Lapland to deliver presents to all the children of the world. He also reminds everyone to follow the rules in force to fight against Covid-19.
Visit Rovaniemi

Tough new coronavirus restrictions were imposed on Thursday over the Christmas and New Year period across Italy, the hardes-hit European country, with nearly 71,000 deaths and more than two million cases.


Bethlehem, where Christians believe Jesus was born, prepared for a Christmas unlike any in its recent history.

Christmas Eve mass at the Church of the Nativity is traditionally the highlight of a holiday season that sees hundreds of thousands of visitors flock to the Palestinian city in the occupied West Bank.

The service was held online this year, with only clergy and select individuals allowed inside the basilica, which was sterilised ahead of the service.

“Everyone feels darkened, tired, exhausted, oppressed for too long under the heavy burden of this pandemic that besieges our lives,” said the Latin Patriarch of Jerusalem, Pierbattista Pizzaballa.

In war-ravaged northeast Syria, hundreds of residents of a predominantly Christian neighbourhood in the town of Qamishli ditched face masks and donned Santa hats, throwing caution to the wind to celebrate a Christmas tree lighting ceremony.

“We were concerned celebrations would be cancelled this year due to the novel coronavirus, but as you can see everyone is here celebrating and we are happy,” said Maria Danhou, a 36-year-old mother of two.

Germany has been forced to cancel its famous Christmas markets, while in Kuwait, churches were closed until January 10 despite being home to a large Christian community.

For many, the isolation that has defined the past year will continue into Christmas Day and beyond — such as in Belgium, where residents are largely limited to welcoming a single visitor.

Britons, meanwhile, were cut off from swathes of the world due to the emergence of a new Covid-19 strain.

Some UK border restrictions have been temporarily relaxed for the holidays, but thousands from other European countries are still stranded in England.

“Home for Christmas? Forget it,” said Laurent Beghin, a French truck driver who delivered his cargo but was still stuck days later.