Chris Gayle to be banned from BBL over ‘inappropriate’ interview 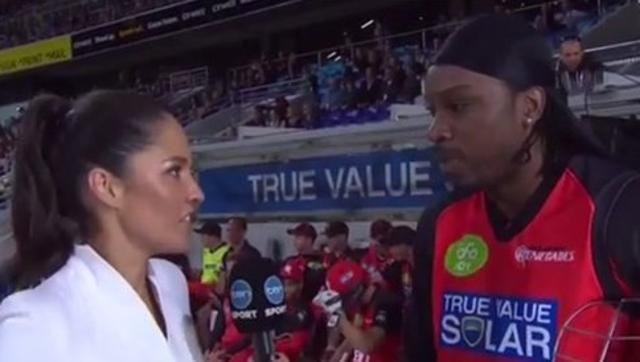 West Indies batsman Chris Gayle is set to be banned from future Big Bash League tournaments as a fallout of his controversial TV interview with Channel 10 journalist Mel McLaughlin.

Gayle did escape an immediate suspension after jokingly asking McLaughlin for a drink in a mid-match interview, but the destructive batsman was fined $10,000 by his side Melbourne Renegades and now, Cricket Australia is set to ban him from BBL, according to a report in the Herald Sun.

Though the star batsman did apologise after his “joke” flirt, which was branded “disrespectful” and “inappropriate” by authorities, it is learnt that CA is not willing to invite him back next year.

Gayle invited controversy after he said he was happy to be interviewed by McLaughlin “just to see your eyes for the first time” during his sides’ win over the Hobart Hurricanes on Monday.

“Nice, so hopefully we can win this game and we can have a drink after,” he said.

“Sorry,” he added, breaking into a big laugh.

CA and Big Bash League officials did not see a funny side and condemned Gayle for his comments.

“There’s just no place in the BBL or — for that matter, cricket anywhere — for that sort of behaviour.”

Cricket Australia chief James Sutherland offered support for McLaughlin, saying on Tuesday that no one should have to face such comments, which were “completely out of line” and “inappropriate for the workplace”.