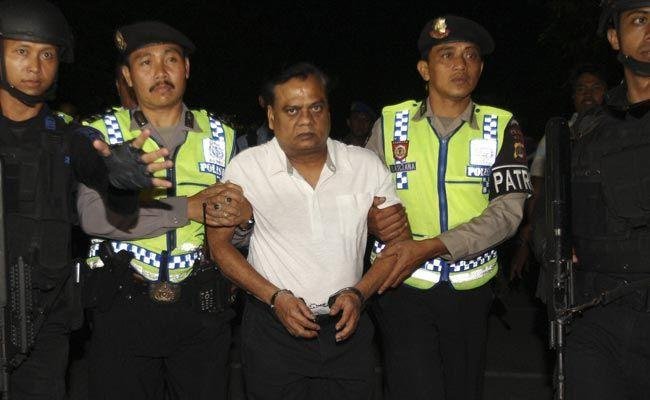 After spending more than 25 years on the run, gangster Chhota Rajan was brought back to India early this morning to face charges in dozens of crimes including murder, extortion and drug trafficking after he was arrested in Indonesia.

The Central Bureau of Investigation (CBI) said Rajan, whose real name is Rajendra Sadashiv Nikalje, had been flown by an Indian Air Force jet to Delhi after he was tracked down to the resort island of Bali and arrested last week in Indonesia.

Those interrogating him say that on October 25, while Rajan was waiting in line to board a flight to Australia at the airport, the police asked him to step aside and state his name. Though his passport lists him as “Mohan Kumar”, the gangster answered with his real name Rajendra Niklaje.

Indonesian authorities had received a tip-off from Australian police, who confirmed in September that the 55-year-old had been living there under an assumed identity. They then had him fingerprinted and experts confirmed this was the man wanted in India with a red corner notice- an international alert that he should be arrested.

“Rajendra Sadashiv Nikalje alias Chhota Rajan alias Mohan Kumar has been successfully brought back to India on deportation from Indonesia today morning,” the CBI said in a statement. “He is in (the) custody of CBI-Interpol. Legal formalities are in process.” In an orange prison jumpsuit, a handcuffed Rajan told reporters in Bali that he faced death threats in India, alleging that some Mumbai police were “working with Dawood”.

Before his extradition to India, Rajan told reporters in Bali that “all cases against me are false”.

Rajan was the alleged former right-hand man of Mumbai underworld don Dawood Ibrahim, who is accused of masterminding the 1993 bomb blasts in the city that killed more than 250 people in retaliation for riots that had targeted Muslims a few months earlier after the Babri Masjid was demolished in Ayodhya by right-wing extremists.

Rajan parted with Dawood Ibrahim after the attacks, becoming a rival to his former ally, and is accused of running one of several underworld outfits that had a grip on India’s financial and entertainment capital in the 1980s and 1990s until a police crackdown.

Interpol had flagged him as a wanted man back in 1995 and he was later accused of ordering the murder of a prominent Mumbai crime reporter J Dey who was gunned down in a drive-by shooting the same year.

Mumbai Police Deputy Commissioner Dhananjay Kulkarni, who was one of the officers on the flight that brought Rajan back from Indonesia, said the force had 78 cases registered against Rajan.

His deportation, due earlier this week, was delayed after a volcanic eruption on a nearby Indonesian island forced authorities to ground all flights from Bali for two days.

Many have speculated it could help lead authorities to Dawood Ibrahim, who has been on the run since 1993 and lives in Pakistan. He remains India’s most-wanted man and was branded “global terrorist” by the United States in 2003.