Charlie Woods shows uncanny likeness to his father Tiger Woods, but deserves to grow up unburdened by expectation 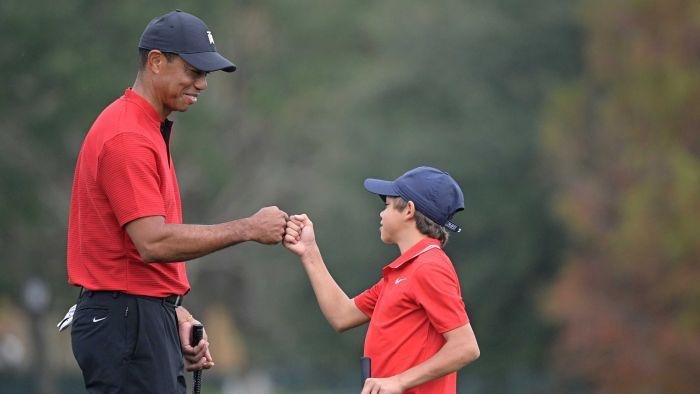 The sight of Tiger Woods’s 11-year-old son Charlie perfectly imitating his father’s swing at an exhibition event in Orlando will have drawn two distinct responses from golfers.

First “Awww, isn’t that cute”. And then, under the breath, “That’s just not bloody fair!”

That Charlie Woods was not merely a cute accessory but has clearly inherited at least some of his father’s sublime gifts with the sticks seems like another slap in the face to those of us from the shallow end of the sporting gene pool.

Isn’t it enough that Little Chuck gets the billion-dollar inheritance and the enviable lifestyle without also turning up for a televised event and shaming public course hackers by splitting fairways and making an eagle on par five?

Yet the public coming out of Tiger’s cub raises rather more serious implications for Charlie’s immediate future and even his future wellbeing, than our petty jealousy.

As if his surname was not already a beacon for unfair comparison and premature judgement, Charlie’s uncanny resemblance to his father’s golfing style will excite immediate expectations about his career trajectory — before we even know if he wants to have a professional golf career.

You need only ask Jack Nicklaus Jnr or Greg Norman Jnr how much lead the name of an all-time great can put in your golf bag, or how much an early public appearance with Dad on the links can excite the media.

Although neither of those famous sons was forced to resort to changing their surnames, as was the case with John Bradman who changed his name for a time to Bradsen to avoid the reflexive comparisons with his father’s unapproachable achievements.

Still, if Woods can’t stop the media and the public making the most outrageous predictions about sons’ potential, he can at least draw from his own experience being paraded on TV talk shows as a wunderkind not long after he first talked.

“I’m trying to make sure he has the right environment, that he’s sheltered and away from this,” said Woods, who you suspect would have more chance hiding a giraffe in his Tupperware cupboard than deflating the enormous and potentially unrealistic expectations about Charlie.

Meanwhile, as we consider Charlie’s apparent aptitude, the rest of us can ponder the nature vs nurture debate that at least seems to give the children of talented athletes a depressingly unfair advantage over mere sporting mortals.

While the name excites attention, what we tend to overlook when obsessing over sporting bloodlines is how greatly the environment in which the children of elite athletes are raised contributes to their own sporting success — the hours spent playing on the sidelines at a parent’s games and training, the constant exposure to top-level performance, the backyard coaching and the wisdom shared across the dinner table.

At the same time, the success of a handful of brilliant “children of” tends to overshadow the stories of those who either failed to repeat parental success, or who did not have the athletic ability, psychological disposition or simply the will to try emulating a parent’s endeavours.

The best book written that touches on this subject is called Rose Boys.

It is the story of Collingwood great the late Bob Rose’s two sons Robert Jnr, whose own career as VFL footballer and Victorian state cricketer was tended by the car accident that left him a quadriplegic and the book’s author, Peter, who is a poet with sensitivities more attuned to those of his opera singing, piano-playing mother than his footballing father.

The book explores partly how Peter is considered by some to have “missed out” because he did not inherit his father’s sporting ability and, perhaps as a result, was denied the same level of affection and regard as his “talented” brother.

But, more hauntingly, there is also a stark portrait of the difficulty for the whole family both in living in the shadow cast by Bob’s reflected glory and, later, the bitter disappointment of a succession of losing grand finals as Collingwood coach and the tragedy of Robert Jnr’s plight.

I have spoken to the children of some renowned athletes who are bemused, even insulted, by the preconception that their own success is preordained and not the result of hard work, and sometimes even in defiance of the outsized expectations their parents’ achievements have created.

The nature versus nurture argument applies in even less accomplished families.

In my own family there is a running joke that my youngest son has “thrown to the dam” by inheriting at least a skerrick of his mother’s family’s sporting ability and defied my own lumpen genetics. To strain the racing analogy, he is by Drongo out of Makybe Diva.

But whatever his modest sporting achievements, I suspect they will be as much due to the 9 million throwdowns he has faced from his park cricketer father and the long games of kick-to-kick as they are of the genetic inheritance of a maternal grandfather who played for the Waratahs and a Mum who was a state-level junior netballer and basketballer.

Of course, few of the more sobering thoughts on parental succession will be applied to Charlie Woods who has both the advantage and possibly the misfortune of being the son of the greatest golfer of this, and perhaps any, era.

But the one universally relatable image of Tiger and Charlie in Orlando was the proud glow the father emitted as he watched his son play.

You only hope he can continue to enjoy that simple feeling now that his cub has been released from his protective cage into the sporting wild.