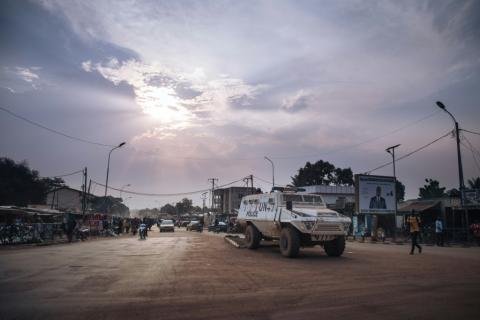 A rebel coalition that has been fighting the government in Central African Republic said Friday it was calling off a three-day ceasefire ahead of a tense general election at the weekend.

The rebel groups launched an offensive a week ago threatening to march on the capital Bangui, in what the government described as an attempted coup, but their progress was halted with international help.

The Coalition of Patriots for Change (CPC) then announced a brief truce before presidential and legislative elections on Sunday which are seen as a crucial test for the troubled country.


But the CPC said in a statement Friday it had “decided to break the 72-hour truce it had imposed on itself and resume its unrelenting march towards its final objective” — taking the capital.

In the statement, which was confirmed to AFP as authentic by two of the six groups in the coalition, the CPC said that it made the decision “faced with “the irresponsible stubbornness of the government”.

The ceasefire’s signatories had “invited the authorities to observe the ceasefire over the same period” and called on President Faustin Archange Touadera to suspend the election.

But government spokesman Ange-Maxime Kazagui dismissed the ceasefire on Thursday, saying it was “a non-event” and that “we haven’t seen these people stop what they’re doing”.


The CPC said the government had “cavalierly rejected” this “chance for peace”.

The authenticity of the statement was confirmed by two of the main armed groups in the coalition — the 3R and the Popular Front for the Rebirth of Central Africa (FPRC).


General Bobo, the leader of 3R, told AFP that “now either the government disperses us, or we march on Bangui, which is our final objective”.

After a brief lull in fighting on Thursday morning, clashes resumed in Bakouma, about 800 kilometres (500 miles) northeast of Bangui, according to Vladimir Monteiro, spokesman for the UN’s MINUSCA peacekeeping force.

The CPC was created on December 19 by armed groups who accuse Touadera, the frontrunner in Sunday’s election, of trying to rig the vote.


Its components are drawn from militia groups that, together, control two-thirds of the country.

Earlier, the government accused Touadera’s ousted predecessor, Francois Bozize, of fomenting a coup with the rebels, a charge he denies.

Gunmen had sought to advance down the main highways towards Bangui, but were stopped, according to MINUSCA.

MINUSA said Thursday that a 300-strong contingent of Rwandan reinforcements had arrived in the country.

Russia, which recently signed a military cooperation agreement with Touadera’s government, has also sent at least 300 military instructors to bolster the CAR’s forces.

Sunday’s elections are deemed a key test of the strife-torn country’s ability to recover stability.

Touadera, 63, is considered a shoo-in for a second term after the CAR’s top court barred Bozize, who is on a 2014 wanted list and under UN sanctions, from standing.

But a crucial question is whether turnout will be badly affected by violence or intimidation, denting the credibility of the next president and the 140-seat legislature.

On the streets of Bangui on Friday — the last official day of campaigning — more attention seemed to be paid to Christmas celebrations than the looming elections.

“I am not afraid. I’m going to vote on Sunday and I think peace will return after the elections,” said Wallace, 27.

Mineral-rich but rated the world’s second-poorest country on the Human Development Index, the CAR has been chronically unstable since independence 60 years ago.