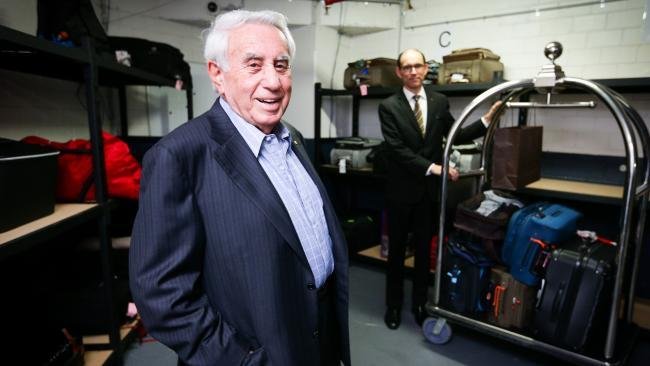 BILLIONAIRE residential property founder Harry Triguboff — founder and head of the Meriton Group empire — has topped the BRW Rich 200 list for the first time ever.

The 83-year-old’s wealth soared to a record $10.62 billion this year as his company surged in value due to the property boom.

Triguboff and Melbourne businessman Anthony Pratt — who came in at number two with $10.36 billion — are now members of their own exclusive club, with both boasting fortunes above the $10 billion mark.

Apartment developer Triguboff managed to edge out Gina Rinehart from the top spot for the first time since 2011.

Rinehart’s wealth has dropped from $14.02 billion last year to $6.06 billion due to falling iron ore prices. The mining mogul came in fourth on the list behind Anthony Pratt and Westfield giant Frank Lowy, who came in at third.

Pratt’s US-based business, Pratt Industries, is the biggest Australian-owned employer in the US and is rising in value after the opening of a giant new box factory near Chicago.

Frank Lowy has grown his wealth by about $480 million to $8.26 billion, after a good year on the stockmarket for shopping centre giant Westfield.

Melbourne billionaire John Gandel — the co-owner of Melbourne’s Chadstone Shopping Centre — rounds out the top five, boasting a fortune of $5.40 billion.
This year’s rich list has 53 billionaires — the most ever. They include Jonathan Munz, whose family recently floated plumbing manufacturer Reliance Worldwide Corporation, at position 50 with $1.07 billion wealth.

James Packer’s wealth has gone down more than $1 billion to $5 billion thanks to a falling share price for Crown Resorts and a legal settlement that sees his sister Gretel Packer (number 77 with $739 million wealth) also debut on the list.