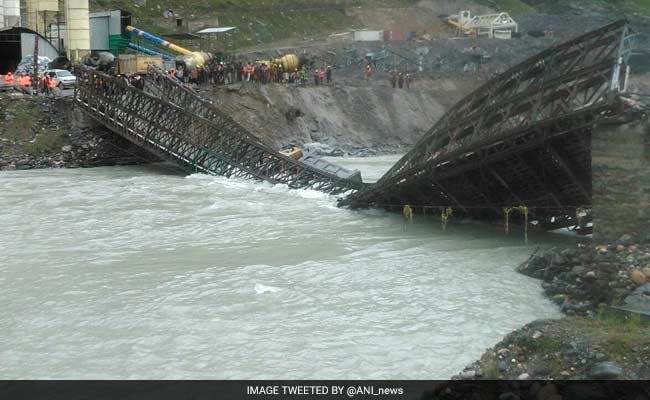 A supply bridge for the under construction Rohtang Tunnel project in Himachal Pradesh collapsed due to strong currents in the Chandra river while a truck was crossing it on Monday. The driver was rescued immediately.

“The bridge providing approach to the tunnel at the north portal near Telling village at Sissu in Lahaul and Spiti suddenly collapsed but there was no loss of life,” Chief Engineer of Rohtang Project Brigadier D N Bhatt told Press Trust of India.

The truck, which fell into a ditch, would be salvaged and the bridge would be restored in next four-five days, he said.

Heavy rain and flash floods have caused landslides in the area, causing a lot of damage to the roads in the area.

The 8.8-km long Rohtang Tunnel, under the Rohtang Pass on the Leh-Manali highway, will be one of India’s longest traffic tunnels when it is constructed. The Rohtang Pass remains close for six months due to snow; the tunnel will provide round the year access.