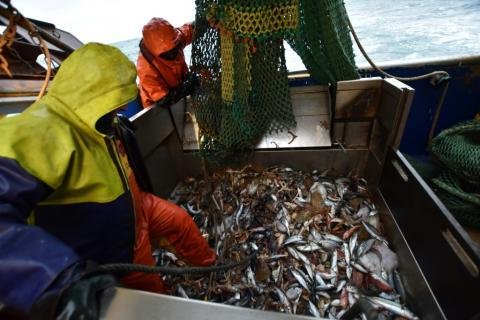 An EU-UK trade deal years in the making finally emerged Thursday after the EU and Britain reached a compromise on access to the wealth of fish in British waters.

The issue had been the subject of bitter last-minute wrangling.

Like all nations, Britain has an exclusive economic zone (EEZ) that stretches up to 200 miles (320 kilometres) from its shores.

EU members — including Britain until January this year — long agreed to share management of their zones and developed a common fisheries policy (CFP) that allocated quotas of different stocks to each nation’s fishing fleet.

More than 100 different species have been managed jointly by the EU and UK in the North Sea and North Atlantic.

On top of the CFP, there is limited access for certain EU countries’ vessels to Britain’s territorial waters between 6 and 12 miles from the coast, based on historic fishing practices.

That means around 40 percent of the value of fish caught in Britain’s EEZ goes to the fleets of eight EU nations, according to a European Parliament report. Norway also gets a share of the haul.

For the French industry, fish caught in British waters account for 20 percent of the total annual value, while the figure is even higher in Belgium (50 percent), Ireland (35 percent), Denmark (30 percent) and the Netherlands (28 percent) according to figures from 2011-15.

The top species include open-seas or pelagic fish like herring, mackerel and whiting, as well as some demersal (sea bottom-dwelling) varieties like sole, plaice and pollock.


Of fish and seafood brought in by British fisherman, between 60 and 80 percent is exported, with the EU accounting for around two-thirds of that trade.

The wealth of fish in British waters stems from biological mechanisms in play in breeding grounds along the northern French coastline, a shallow, sandy strip that stretches all the way to Denmark.

“When they become adults, they leave for the somewhat deeper, colder and more oxygenated waters of the north,” according to Carla Ulrich of the French Research Institute for Exploitation of the Sea — in other words, British waters.

The phenomenon has been accentuated by climate change and is especially sensitive for cod and plaice, species that are heavily prevalent in the North Sea.

An agreement surfaced after the EU proposed ceding around 25 percent of the value of hauls fished in British waters by European fleets after five-and-half years, the bloc having initially sought a six-year transition period.

Earlier in the negotiations Britain was pushing for an 80 or 60 percent cut in the EU’s share, phased in over only three years, and that was unacceptable to the Europeans.

After the transition period, rules governing mutual access to fishing zones will be negotiated annually.

After the accord emerged, EU negotiator Michel Barnier promised Brussels would stand by Europe’s fishing crews.

“This agreement will require efforts,” Barnier said. “I know the European Union will support its fishermen and women. It will accompany them.”

A European diplomat acknowledged concerns that Britain could shut out EU boats after the transition period, adding if the EU were ultimately not satisfied with the new quota arrangements it could seek to impose measures against the UK fishing sector.

- Advertisement -
Share
Facebook
Twitter
Pinterest
WhatsApp
Previous articleFIFA cancels men’s 2021 U-20, U-17 World Cups
Next articleAustralia v India Boxing Day Test at the MCG could be one of the strangest yet amid COVID-19 pandemic
- Advertisement -