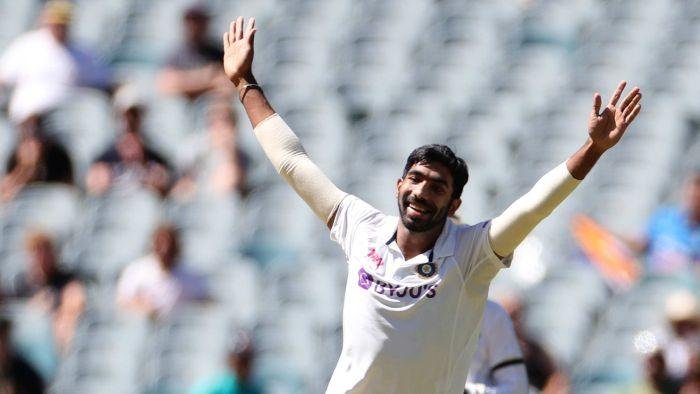 Late on the first day of the Boxing Day Test, the bat, baggy green cap and signature polarised sunglasses of the late Dean Jones were propped against a chair in front of Australia’s dugout. But it was a day on which even the most mercurial batsman would have struggled in the face of quite brilliant bowling.

India finished it 1-36 following the loss of Mayank Agarwal for a duck, after the tourists bowled Australia out for 196 in an exhilarating display. Yet for all the uncertainty of the strokeplay, it was an afternoon that confirmed the obvious on several fronts.

Firstly, any bowling attack containing Jasprit Bumrah and Ravi Ashwin is a potent one. Secondly, Test cricket is much more fun on surfaces offering assistance to the bowlers. Thirdly, Australia’s batting frailties will continue in the absence of significant contributions from Steve Smith.

The non-bowling star of the day was groundsman Matthew Page’s drop-in pitch, now much improved from the lifeless rotters that had previously spoiled one of Australian cricket’s marquee games. In the first session it prompted up to five slips for the quicks and a phalanx of close fieldsmen for Ashwin’s spin, creating far greater atmosphere and tension than heaving stands would have — as sad as it was for so many Melburnians to miss out.

The opening day also suggested that India’s planning for this encounter was astute, and it has lost nothing in the tactical battle via stand-in captain Ajinkya Rahane’s replacement of Virat Kohli.

An example: in the first innings at Adelaide, Rahane watched the skipper introduce Ashwin far too late. Here, Rahane brought his best spinner on in the 11th over and he struck immediately. For the remainder of the day, the rotation of bowlers and placement of fieldsmen worked almost flawlessly.

Bumrah’s statistical return in the first session — 1-7 from eight overs — told a story of stifling economy but sold short his smiling harassment of the batsmen with almost every delivery he sent down. He ended the day with 4-56 from 16 delightful overs.

If Rahane’s rise to the captaincy was a necessity, several other forced changes improved India’s balance and potency. Debutant paceman Mohammed Siraj showed nothing short of mastery of the old ball, moving it both ways to strangle Australia’s middle order, and Ravi Jadeja added vitality, skill in the field and a fifth option with the ball.

The underestimated addition stood behind the stumps.

Rishabh Pant is best known for having more one-liners than National Lampoon’s Christmas Vacation and keeping skills about as reliable as Cousin Eddie’s plumbing. He is noticeably well-upholstered for a 23-year-old athlete. But he is also a far superior batsman to Wriddhiman Saha, whom he replaced, and his spiky attitude and presence on day one rammed home India’s considerable advantage.

Again, the tone of Australia’s innings was set by its makeshift openers. And again, not in a good way.

Joe Burns sprinted to the crease to start the day, lunging and windmilling and shadow-batting himself into a frenzy, then froze at the vital moment. So constipated was his stay, and so often did he play at Bumrah and miss, the 10 deliveries encompassing his duck felt like 30.

Reinforcing Burns’s sense of inner turmoil were the contrasting efforts of Matthew Wade, who ambled to the crease like he was heading to the corner store for milk, then threw not only the kitchen sink but the leftover turkey and Nan’s wine trifle at India’s opening bowlers. He reached 30 by sweeping a neat boundary off Ashwin, but with drinks in sight, aimed an ill-advised heave towards Federation Square. Not even a shoulder-charge from teammate Shubman Gill could stop Jadeja holding the catch, and Australia was 2-35.

The strangest sight of the day was Steve Smith falling so willingly into an obvious trap set by Rahane and Ashwin, flicking the off-spinner straight into the hands of Cheteshwar Pujara at leg slip and departing for an eight-ball duck. Just as crucial to that wicket was the over preceding it. Knowing Smith likes to get off the mark immediately, usually with a skittish single, Bumrah starved him of such a chance. India bowled in similar partnerships all day.

And it might have been even worse for Australia if not for a bizarre interlude three minutes from lunch. Ashwin was certain he’d trapped Marnus Labuschagne in front when the Queenslander sunk into a sweeping position and was rapped on the knee-roll of his front pad. Umpire Bruce Oxenford agreed. TV umpire Paul Wilson did not, although he was basing his decision on a ball-tracker reading that looked like the work of the Wachowskis.

Unconvincing to start with, Travis Head grew into another promising innings, combining with Labuschagne for an 88-run partnership that stretched across 18 overs and prompted Rahane’s only misfire: Siraj’s six-over spell after lunch was a couple too many, and meant Bumrah went almost two hours without sending down a delivery.

Of course, Bumrah returned and struck almost immediately. Perhaps Head became overconfident when he battered a pair of boundaries from Bumrah’s first over back. Perhaps there was some other extenuating circumstance. But when he shuffled slightly onto his back foot and threw his hands at a delivery that shaped in then straightened, it was hardly surprising to see Bumrah extract a thick edge, nor Rahane gobbling the catch at gully.

The South Australian made 38 from 92 deliveries — a lot of hard work done, but not the hardest work. Almost half of Head’s 30 Test innings have ended between 10 and 45. It might be his undoing.

It was certainly Australia’s undoing — Head’s wicket was the first in a collapse of 7-71. Far from his fluent best, Labuschagne gutsed it out to 48 from 132 and then handed Siraj his first Test wicket by clipping a glance straight at leg gully. Siraj started tailing the old ball in towards the right handers and posed constant problems. By the time he trapped Cameron Green, his second spell had produced 2-15 from eight superb overs.

Australian skipper Tim Paine could not back up his sparkling form from Adelaide, feathering a catch to Pujara at leg slip off the bowling of Ashwin, another low-percentage shot. The tail fell away quickly, Starc skying Bumrah to fine leg, Lyon having an entertaining frolic to 20 before becoming Bumrah’s fourth victim, and Cummins handing Jadeja his first.

Like India, Australia is currently engaged in a group assignment in which the bowlers earn everyone else their high high marks. Sure enough, Mitchell Starc struck in the first over of India’s reply, trapping Mayank Agarwal LBW for nought.

But the finish was shaggy. Wade unsuccessfully slid at the boundary and rolled his ankle, and a ball later Labuschagne shelled a regulation chance at third slip to hand debutant opener Gill a life and India the day’s honours.

If Dean Jones had been present, he doubtless would have wondered: why wasn’t the fieldsman wearing sunglasses?