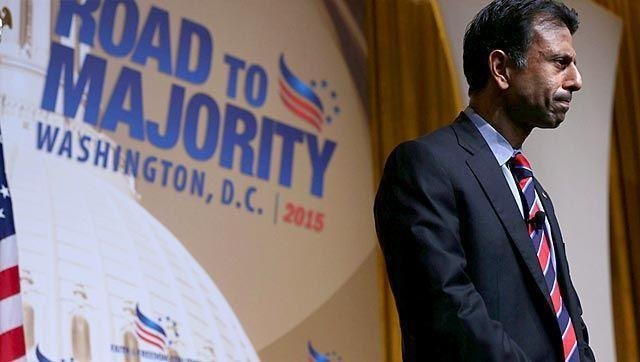 Louisiana governor Bobby Jindal on Wednesday announced he was running for the White House, making him the first Indian American to seek the country’s highest office.

“My name is Bobby Jindal, I am the Governor of the great state of Louisiana, and I am running for President of the greatest country in the world – the United States of America,” Jindal said at an event launching his run.

Jindal joins a crowded Republican race for the party nomination that now has 13 candidates, to just four on the Democratic side, with a few more announcements expected in coming days.

It will be tough for him to be noticed, and heroic to make it.

Jindal, who is a two-term governor and a two-term member of the House of Representatives, has been trailing badly in all public opinion polls on Republican contenders.

He finished 11th in a field of 13 in the most recent poll, by The Wall Street Journal and NBC, that’s precariously close to the cut-off mark for making it to the primary debates.

Only the top 10 candidates, according to the polling numbers, will be on the stage for the debates that determine electability not only in the primary stages, but also beyond.

Jindal has said in multiple interviews that he is not perturbed by his low poll numbers, saying that’s exactly where he was when he first ran for governor, but went on to win.

The governor has also had problems with his own party, which he called the “stupid party” in a speech, which didn’t go down too well either with the establishment or the base.

And he will struggle to find traction with Indian Americans, whom he has alienated by publicly trying to distance himself from. They now believe he doesn’t need them.

“There are some sections that will support him but his views do not reflect what we believe are the majority views particularly of the next-gen,” said Shekar Narasimhan, a Democrat. “Not sure he wants or needs us anyway!”

Jindal made it clear in his speech he was not interested: “I’m sick and tired of people dividing Americans. And I’m done with all this talk about hyphenated Americans. We are not Indian-Americans, Irish–Americans, African–Americans, rich Americans, or poor Americans – we are all Americans.” Jindal has said that before, and repeating it now should make it look final.

He is 44, is married to Supriya Jindal and they have three children
His parents came to the US from Punjab
He started calling himself Bobby, after a character in a popular TV series The Brady Bunch, while in school.
Became a catholic christian in college.
Started out studying medicine at Brown University, was accepted at the medical schools of Harvard and Yale, but chose Oxford, where he studied political science as a Rhodes scholar
He was appointed assistant secretary of health in George W Bush’s administration
Ran for governor of Louisiana in 2003, but lost
Elected to the House of Representatives in 2004, went on to serve two terms
He was elected governor of Louisiana in 2008, the first Indian American governor in the US, and won a second term in 2012.