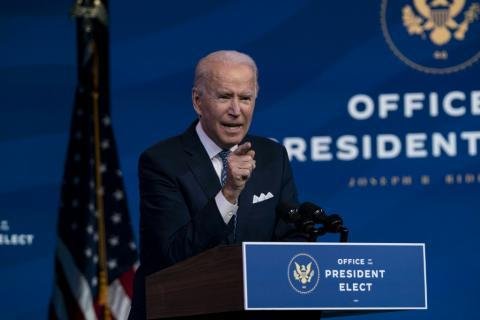 President-elect Joe Biden said Tuesday that the perpetrators of a massive cyberattack on the US government, unofficially blamed on Russia, must face consequences, and assailed President Donald Trump over his response to the threat.

“We can’t let this go unanswered,” Biden said in pre-holiday remarks to the American people.

“That means making clear, and publicly, who is responsible for the attack and taking meaningful steps to hold them in account.”

Biden, who as president-in-waiting has received intelligence briefings on key national security issues, says much remains unknown about the extent of the damage from the attack.

“I see no evidence that it’s under control,” Biden said, responding to Trump’s claim to the contrary.

“This president hasn’t even identified who is responsible yet,” he noted.

He warned he would retaliate once he become president on January 20.

“When I learn the extent of the damage and, in fact, who is formally responsible, they can be assured that we will respond, and probably respond in kind,” he said.

“There are many options which I will not discuss now.”


According to US officials, the most devastating breach of US computer security in years affected at least the departments of State, Commerce, Treasury, Energy and Homeland Security, as well as the National Institutes of Health.

Analysts expect that other departments, including possibly key intelligence agencies, were also victims in the hack, and that it could take months or longer to assess the damage.

Biden called the attack a “grave risk to our national security” and criticized Trump for de-emphasizing cybersecurity during his nearly four years in office.

The attack, he said, was “carefully planned and carefully orchestrated. It was carried out by using sophisticated cyber tools.”

“The attackers succeeded in catching the federal government off-guard and unprepared.”

He accused Trump of falling down on his job to protect the country and of an “irrational downplaying of the seriousness of this attack.”

“It’s still his responsibility as president to defend American interests for the next four weeks,” he said.

“This assault happened on Donald Trump’s watch when he wasn’t watching,” Biden said. “Rest assured that even if he does not take it seriously, I will.”

The administration has yet to officially ascribe the attacks to any country or persons, even though top officials including Secretary of State Mike Pompeo and Attorney General Bill Barr, and senior members of Congress briefed on the issue, have all fingered Russia.

Trump, however, last week accused the media of always hyping the Russia threat.

“The Cyber Hack is far greater in the Fake News Media than in actuality,” Trump tweeted.

“I have been fully briefed and everything is well under control,” he wrote.

“Russia, Russia, Russia is the priority chant when anything happens,” he said, then suggesting China could be the perpetrator.