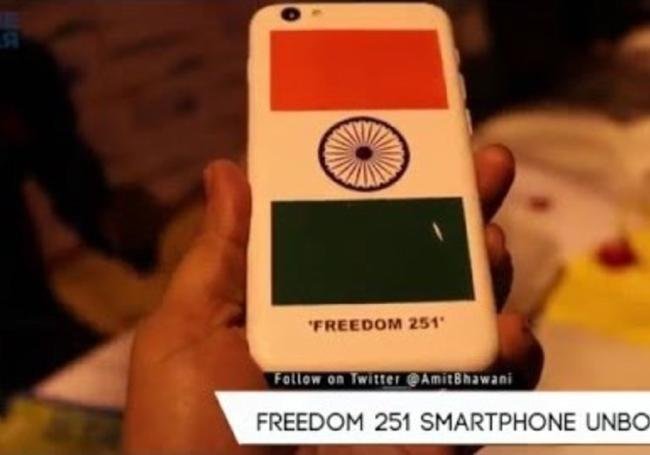 A day after promising to restore its online pre-order services for the Indian masses to book the world’s cheapest “Make in India” smartphone, the “Freedom 251” website continued its poor run on Friday as people faced trouble in pre-ordering the Rs 251 (less that $4) device.

Already mired in controversy over its similarity to Apple iPhone design and appearance and now the Indian government keeping a close watch on its four-day booking offer that started from 6 am on Thursday, the Noida-based startup Ringing Bells Pvt Ltd claimed to have received 30,000 confirmed orders and over six lakh hits per second on its website on the first day.

But hours later, the firm stopped taking orders after its servers crashed owing to a huge rush to book the device online on www.freedom251.com.

However, there were some lucky people who managed to pre-book the smartphone early in the morning when the website was up.

“I kept on trying for about an hour to book the smartphone. I had to refresh multiple times, fill in my details over and over again. Finally I got it booked but I am yet to make a payment,” said Kashi Nath Nandi who works in a private firm in Noida.

After placing the order, the page returned with a message: “Thank you for placing the order. We will email you the link for payment within 48 hours to your registered unique email id to complete your purchase.”

The acknowledgment also shows order number and mentions “One unit per user”.

Ringing Bells is also charging a shipping charge of Rs 40, taking the total price of the phone to Rs 291. The company promises to deliver the device after four months by June 30.

Sanju, a parking attendant in Kirti Nagar in West Delhi also booked the ultra-cheap smartphone in the wee hours on Friday. “I woke up at 4 a.m. to get one phone booked, finally,” he told IANS.

Meanwhile, another Noida resident Pankaj said he was trying to book a phone but later decided to suspend his efforts owing to website issues.

The much-hyped launch of the world’s cheapest smartphone “Freedom 251” was thrown into disarray on Thursday as there was utter chaos at the company’s Noida-based head office besides reports of copyright infringements.

Amid the company’s claims that it has got 30,000 orders on the first day, the calls to the executives went unanswered on Friday as well.

The Indian Cellular Association has written to the telecom ministry, urging the government to get to the bottom of the issue as selling a smartphone this cheap is almost impossible.

Earlier, the photos of the smartphone in newspaper advertisements released by the firm showed that all the icons of the built-in app were almost a replica of Apple’s iOS icons.

According to the information available on Apple website, “You may not use the Apple Logo or any other Apple-owned graphic symbol, logo, or icon on or in connection with web sites, products, packaging, manuals, promotional/advertising materials, or for any other purpose except pursuant to an express written trademark license from Apple, such as a reseller agreement”.

Several attempts to speak to senior Ringing Bell executives on this controversy also went in vain.

“Freedom 251” claims to have an Android 5.1 operating system, a 4-inch qHD IPS display, a 3.2-megapixel primary and a 0.3-megapixel front camera.

The device also claims to have 3G connectivity, 1.3GHz quad-core processor, 1GB RAM and 8GB internal memory and supports external memory cards of up to 32GB.

To power “Freedom 251”, the company has put a 1,450mAh battery and claims to have a service network of 650 centres across India.