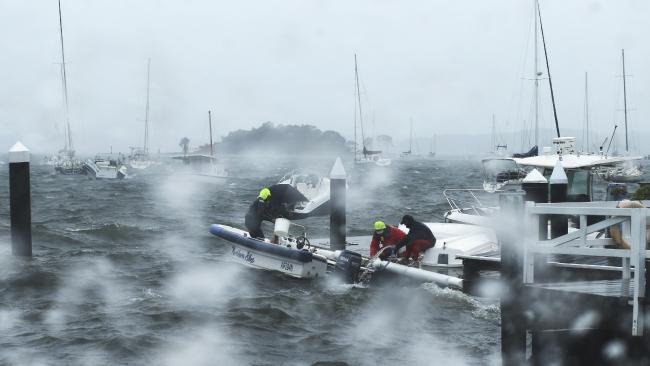 AUSTRALIA’s east coast could be smashed by another severe weather event this week, with forecasts of another dangerous east coast low.

Early forecast models are showing the potential for significant rainfall across large areas of NSW and the southern half of QLD across the weekend and into early next week.

According to Higgings Storm Chasing, a trough is likely to be located across Western and South-West QLD during Saturday, extending into Central and Western NSW.

This trough is forecast to interact with an approaching strong upper level trough to draw in strong moisture off the Coral Sea and Pacific to produce widespread rain and wind.

During late Sunday and into Monday initial forecasts predict there’s the potential for an east coast low to develop along the NSW coast somewhere between Wollongong and Port Macquarie.

If these are correct, areas of the NSW coast mostly from the Hunter south, could see up to 150mm of rainfall in 24 hours plus winds over 125km/h.

The weather system may also impact eastern Victoria as it moves further south.

The Bureau of Meteorology told News Corp Australia that it’s too early to tell exactly how significant the weather event will be.

“The previous system brought extensive rainfall all along the coast and ranges, this one is developing differently, it’s moving different ways and this one is a little bit shorter than the previous one,” senior forecaster Peter Gajewski said.

At this stage they are expecting around 80mm of rain to fall across the NSW coast from Friday through to Sunday.

The forecast isn’t good news for residents who are still cleaning up from the massive east coast low that hit earlier this month.

A number of people lost their lives in floodwaters which caused more than 50 million dollars damage in QLD, NSW and Tasmania.