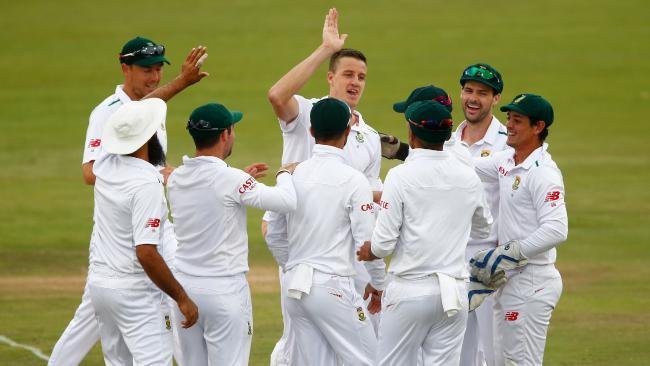 CRICKET Australia has released its summer schedule, with South Africa, New Zealand, Pakistan and Sri Lanka all touring in 2016-17.

South Africa will kick off the summer on November 3 with a Test at the WACA before Australia wraps up its home season with a three-match Twenty20 series against Sri Lanka.

It is still unclear if South Africa will play a day-night Test at Adelaide Oval, with Cricket Australia yet to persuade the Proteas to take on the pink ball.

Whatever happens, Australia will face South Africa in three Tests and the third is locked in at Adelaide Oval.

“There is enormous expectation that we deliver another pink ball Test match this summer in Adelaide,” CA chief executive James Sutherland said.
“Understandably, there is some concern from the South African players, but Day-Night Test cricket is all about the fans and a day-night match in Adelaide will be a bigger Test match crowd than the South African players will have ever experienced.
“The success of Adelaide last year demonstrates the huge potential the day-night format has in revitalising Test cricket all over the world, and it’s for that reason that it is our desire to stage another Test under lights at that venue.
“We believe that having the ability to move matches into the evenings provides cricket fans with greater access to the game, both at the ground and at home on TV, and there is no doubt that this will help grow interest in Test cricket.
“Even for cricket fans at home in South Africa there are benefits. The Day-Night Test hours will allow the match to be televised in a far more attractive time of day in South Africa.”

The Test series will be followed by the first Chappell-Hadlee series on Ausrtalian soil since 2007-08, with trophy holders the Black Caps playing three one-day internationals in Sydney, Canberra and Melbourne in December.

The Gabba will then see its first day-night Test when Australia hosts Pakistan from December 15 to 19.

It’s both good news and bad news for the Brisbane ground, which has been given a coveted pink ball fixture but has lost hosting rights to the opening Test of the summer to the WACA.

That will be the first of three Tests played by Pakistan, which will then take part in a five-match ODI series.

The summer of cricket will then wrap up a three-match Twenty20 international series against Sri Lanka in February. Venues are yet to be confirmed.