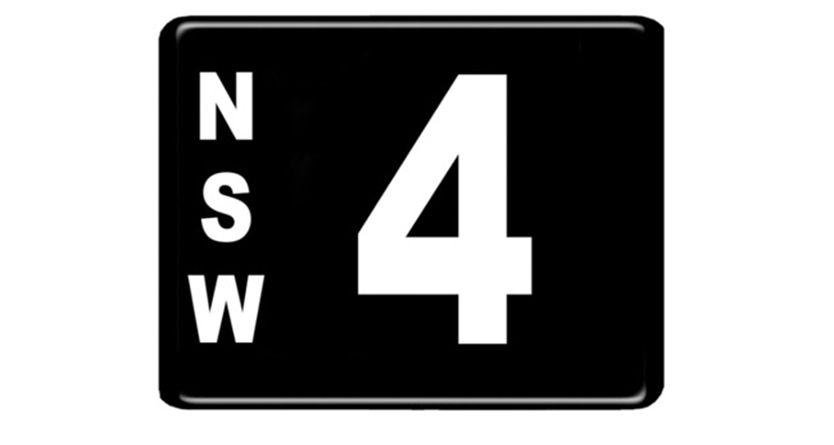 A black-and-white number plate with the single digit “4” has sold at an Australian auction for a record-breaking $2.45 million — more than twice the average cost of a Sydney home.

SYDNEY, AUSTRALIA: A black-and-white number plate with the single digit “4” has sold at a Sydney auction for a record-breaking near US$2.0 million, reportedly to a Chinese-Australian sex toy entrepreneur.

The sale shattered pre-sale estimates of up to Aus$1.5 million, with the auction hammer coming down at Aus$2.45 million — more than twice the average cost of a Sydney home.

“Their unique status and desirability is never going to change.”

“The opportunity to acquire such a plate is exceptionally rare, as most single-digit plates remain in family hands, are usually passed down through generations and rarely, if ever, come onto the open market.”

The auction house refused to reveal who the buyer was, but the Sydney Morning Herald said it was Chinese-Australian billionaire Peter Tseng, who made his fortune in sex toys.

It said he arrived at the Sydney auction on Monday evening in his red Ferrari bearing a No.2 licence plate.

He also reportedly owns a Hong Kong-registered No.1 plate and a personalised number plate “ONE” registered to his 1969 Mercedes in Sydney.

According to records, the “4” plate first adorned a 1909 Rolls-Royce Silver Ghost, then owned by Michelin tyres importer Noris Duval, in New South Wales in the early 1920s.

More recently it was on another Rolls-Royce — that of Aussie Home Loans founder John Symond, who then sold it to a Sydney collector who was among crowd on Monday.

According to the Herald, the New South Wales “1” plate is owned by the family of the late founding chairman of Australian National Airways, Sir Frederick Stewart, which has been in the family since the 1930s.

The number four is considered unlucky in Chinese culture because it almost sounds similar to the word for “death”.