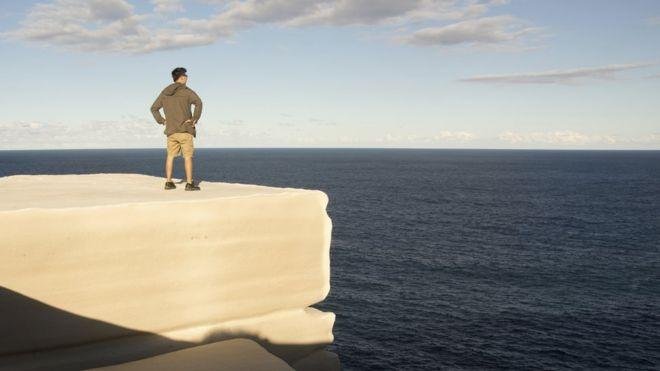 A national park in Australia is to fine visitors who disregard warning signs at one of its most popular natural attractions in order to snap social media-worthy photos.

A metal safety fence currently blocks access to the spectacular Wedding Cake Rock, a pure white cliff-top platform in Royal National Park near Sydney. But groups of up to 30 people have been spotted clambering over the barrier, apparently unperturbed by warning signs noting that the rock is unstable and “may collapse suddenly without warning”, the Sydney Morning Herald reports. Photographs of people wandering around on the rock over the Easter weekend have been posted on Instagram, to the alarm of park authorities.

“People are being so incredibly reckless with a genuine, imminent danger,” says Gary Dunnett, regional manager at the New South Wales National Parks and Wildlife Service. “Normally a mature response from any adult to being told that something is highly dangerous is to say ‘Thanks for letting me know’ and backing away.”

Mr Dunnett says it’s the first time the park has resorted to fining people for ignoring safety warnings, but that it’s the only option left. The exact penalty hasn’t yet been decided, but could be up to AUD$300 (US$225; £160).

Visitor numbers at Wedding Cake Rock soared last year after photos of people posing near the cliff edge became a social media craze – one man was snapped doing a handstand only centimetres from the sheer drop. A subsequent geotechnical study of the site found evidence of previous rock collapses, prompting park authorities to fence off access and add warning signs which read: “Don’t risk your life for a photograph”.