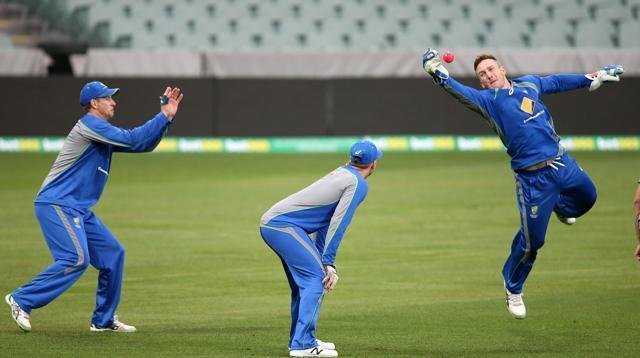 Pink balls and bright lights. The colour and the concept are certainly creating a stir among the cricket fans on the eve of the game’s first ever day-night Test match.

Traditional rivals Australia and New Zealand will face each other at the Adelaide Oval in a revolutionary cricket match which starts on Friday afternoon and is set to span five days and nights.

It will be a major departure from tradition, with the relatively untested pink leather ball replacing the standard-issue red for the first time in a format that dates back to the 1870s.

“We are creating history playing in the first day-night Test so I’m sure a lot of people are going to be watching around the world,” Australia captain Steve Smith said. “And that’s really exciting for world cricket.”

World Series Cricket, established by Australian media baron Kerry Packer in the late 1970s, played a huge role in revolutionizing the game when it threatened to go stale by using the one-day format, a white ball, coloured uniforms, and playing under lights for the first time. However, the concept of playing under lights has taken almost four decades to catch on for the longest form of the game.

The uniforms will remain white for the Adelaide Test — which is one reason why the white ball used in limited- overs matches is not a viable option for the Test — but the session breaks for lunch, once treated as the immovable feast, and tea will change. Play will start at 2pm local time, instead of late morning, and tea will be held after the first session instead of the second, with dinner scheduled between the second and third sessions.

Curators have left a green tinge on the usually dirt-dry Adelaide Oval pitch in order to give the bowlers some assistance in a series that has been dominated by the bat till now. Australia won the opening Test at Brisbane by 208 runs and the second Test in Perth ended in a high-scoring draw, so the series is still alive.

Organisers are expecting a crowd of around 40,000 on Friday, more than double the size of the crowd the last time these two teams played a Test in Adelaide, and significantly more than the opening days of the first two tests.

“People are voting with their feet and they are encouraged by what the pink ball Test has to offer,” New Zealand skipper Brendon McCullum said. “For us to play in front of 40,000 people in a Test match is pretty amazing.

“Hopefully it goes off brilliantly, there are no challenges and no problems. If we have the final session on the fifth day under lights and the Test match result is in the balance, then it could be … something that is outstanding for the game moving forward.”

Much of the focus in the buildup to the Test has been on the pink ball — which has been used rarely in Australian first-class matches and which New Zealand has used only in practice games.

Critics say it won’t be durable enough to last 80 overs because of colour deterioration as it gets scuffed and the white seam will make it difficult for batsmen because of a lack of contrast. There’s also the question of whether the ball could swing considerably more during the cooler evening sessions than it does during the day.

McCullum, who is regularly praised for his astute and unconventional tactics in limited-overs cricket and longer formats, hinted that over rates could be slower during the day to allow bowlers more overs to work under lights, and there could be some unusual tactics with run rates as well.

“One of the things that’ll come out of this … (is) that there is going to be some different demands tactically on captains and how they try to exploit some of those opportunities,” he said. “It’s going to ask some different challenges of both Smithy and myself and our cricketing nous.”

While there’s an emphasis on the new playing conditions, the Test will start on a sombre note to mark the one-year anniversary of Australia batsman Phillip Hughes’ death. He was struck by a ball under the back of his batting helmet while playing in a match in Sydney and died two days later.

“Obviously, it was a pretty difficult time for us all coming here last year just after the horrible incident,” Smith said. “I think for us now a year on we still have Hughesy in the back of minds every time we walk out on the field. We are going to do our best to play with a smile on our face and hopefully play well for Hughesy.”