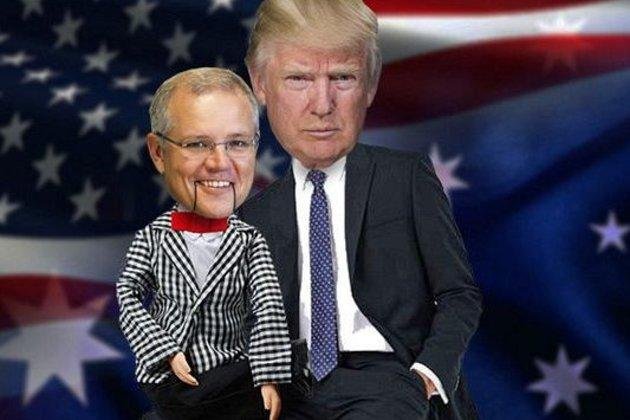 It consequently suffers a lack of self-respect, independence and a viable and progressive relationship with our largest trading partner.

In 1909, at the urging of Great Britain, Australia organized a local section of the Imperial General Staff (IGS). In light of the foreseeable European war, Britain wanted to mobilise and control the armed forces of what were termed the Dominions, through the IGS.

In 1910 Lord Kitchener inspected troops in Australia and urged the establishment of a military college to train officers. This occurred on 27 June 1911, in a former sheep station, Duntroon, on the edge of Canberra. It was modelled on the British Military College, Sandhurst, and staffed with British officers and senior NCO’s including my grandfather.

The training, mindset and philosophy were to prepare officers to fight alongside or within British units for British objectives. This proved successful and lasted unchanged until the British withdrew from Asia and the Pacific in the 1950s. Luckily for Australia, the Americans moved to fill the gap.

The conservative Australian Prime Minister, Robert Menzies, encouraged and welcomed the Americans and adopted their world view which included a hostile China. It was accepted, without debate, that China was promoting the downward thrust of Communism through Asia.

Ever fearful of its environment, Australia signed a collective defence agreement with the U.S. in 1951 to cover the security of the Pacific. Known as the ANZUS Treaty, it has been invoked more broadly than originally intended. Lacking self-confidence, Australia has clung to the Treaty, which it views as an insurance policy requiring regular contributions. The first of which, eagerly grasped by Menzies, was to offer troops for service in Vietnam to help the U.S. contain Communism.

The U.S. had misread the situation (it was in essence a civil war) but we did not question them. Menzies was keen to pay his dues.

Another conservative Prime Minister keen to pay his dues was John Howard. He sent Australian troops to join U.S. forces in Iraq and Afghanistan. In the case of the latter, without strategic objectives other than to bust up Muslims which had the unintended consequence of Australian Special Forces committing war crimes.

To date, the conservative Government which sent them there is having trouble getting its head around this and has shown every inclination of sweeping the initial investigation under the carpet. This is a terrible consequence of having stupidly followed the Americans into a meaningless war.

Why do we follow the Americans so blindly and before them the British? As noted above a lack of self-confidence has been a motivating factor but similarly an inferiority complex which has seen Australians gawk at American exceptionalism. A lack of self-respect is also in play as illustrated by the treatment of Indigenous Australians and refugees.

The ugliness of racism sits just beneath the surface in Australia. The white political, business and military establishment is comfortable in dealing with America and Europe, far less so with Africa and Asia. It was easy for Australia to wage war in Vietnam; for at that time, the Vietnamese were seen as a lesser and crude race.

During my army training, we were taught to refer to them as “gooks”, “slope heads” and “Charlie”. Equally derogatory racial stereotypes have made it easier for Australians to wage war against the “rag heads” of Iraq and Afghanistan. The racism of the troops was aided and abetted by the racism of the Coalition Government which treated refugees as a lesser group and referred to them as terrorists.

The training of ADF officers occurs within the framework of going to war with the United States. There is no independence of thought because Australia has no independent foreign or defence policy. Defence procurement is governed in a similar fashion. Whatever is purchased must have interoperability with U.S. defence hardware. And our defence spending is profligate.

Defence analyst, Brian Toohey, describes it as mind-boggling. We are purchasing submarines not yet designed, for delivery between 2030 and 2050 to operate with U.S. submarines in the South China Sea for a current cost of $90 billion.

We purchased F35 fighters off the design board and 20 years later due to innumerable design failures and difficulties, only a handful have been delivered. New frigates have undergone extensive design changes to fit particular radar systems. And together with the U.S., we are developing hypersonic cruise missiles.

In terms of our region, this is a massive overspend unless we see our major trading partner as our enemy. And if we do, why is this so? Is it because our erstwhile military ally does? It makes no sense.

Instead of recognising the dynamics of our trading relationship with China and upping the level of our diplomatic and cultural ties, we have downgraded them.

Scott Morrison talks about defending our sovereignty against China but that has already been ceded for no good reason to America.

I wonder if Morrison and Peter Dutton realise how much of our sovereignty, we have passed to the U.S. with their base, known as Pine Gap, in the Northern Territory?

We only have partial access and there are other U.S. bases and facilities in Australia to which we have limited access. There are American B52 bombers at Tindale RAAF Base ready to bomb Chinese submarine pens on Hainan Island. What are we doing? What have we been conned into?

The Government’s attitude toward the Chinese government and people is condescending and racist. They are seen as inferior compared to Europeans.

Morrison and Dutton have had limited exposure to life outside of white Australia. Their racism is exemplified by their treatment of refugees. Their contempt was there for all to see in the tone and thrust of their call for an international inquiry into the origins of COVID-19 in the wet markets of Wuhan. The sneer of “wet markets” and the desire to punish China. This was not lost on 1.6 billion Chinese, particularly the government.

Despite our best interests, white Australia will cut off its nose to spite its face. White America and white Australia remain members of a dwindling club. America is worried that the family firm is under threat but can’t bring itself to modernise. Australia as a shareholder on the farm is going to be taken to the cleaners.

It might surprise Morrison, Dutton and Simon Birmingham that the Chinese would like the same respect as that shown to Donald Trump by the Coalition They would like to be on an equal footing with the new American administration. They are angry. They do not want to be spoken down to.