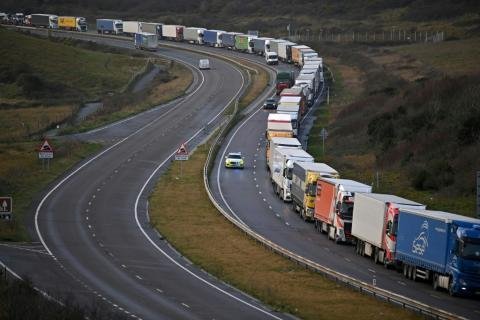 Concerns about soaring virus cases and new lockdowns sent equities and oil tumbling again Tuesday, while fears over a new strain in Britain and stuttering Brexit trade talks kept the pound under pressure.

The mutated virus, which is said to be 70 percent more transmissible, has forced numerous countries around the world to shut their borders to the UK and has overshadowed the rollout of vaccines and news that US lawmakers had agreed a new stimulus.

Analysts said investors were taking the opportunity to cash in recent gains as they wound down for the festive break, with most saying 2021 will see a surge across markets as the economy opens up after people are inoculated.

However, they pointed out that long-term optimism is being kept grounded by concerns about the immediate impact of the latest wave of infections.

“What we’ve seen out of the UK is a scary thing for the markets, which could incentivise some profit-taking,” Steven Wieting, at Citigroup Private Bank, told Bloomberg TV. But the vaccination drive should be a “game-changer”, he added.

Hong Kong, Shanghai, Seoul, Singapore and Jakarta all fell more than one percent. Tokyo shed one percent, while Sydney lost 1.1 percent as investors grew increasingly worried about a spike in new infections in the city that has led to the imposition of containment measures.

Taipei also lost more than one percent after news that Taiwan had seen its first locally transmitted infection since April.

There were also losses in Mumbai and Manila, though Wellington and Bangkok rose.

The losses extended Monday’s sell-off and a retreat on Wall Street.

Axi strategist Stephen Innes sounded a note of warning for early next year.

“You will read a lot of after-the-fact analysis suggesting (Monday) was a holiday-exaggerated selloff,” he said in a note. “To a large degree, that might be the case on some overbought positions like oil and short dollar.”

“However, ignoring these early warning signals and not bracing yourself for a challenging start to 2021 is flat-out dumb. Indeed, this could only be the tip of a reflationary washout.

“The risk is growing for significantly extended lockdowns in several countries. There is a gap to be bridged between now and when experts expect herd immunity — in the middle of the second quarter at the earliest.”

Lawmakers in Washington on Monday finally passed a bill setting aside around $900 billion in support measures for the ailing US economy, bringing an end to months of haggling. The package will now go to the White House for President Donald Trump to sign this week.

But analysts said the move had been priced into markets.

With several countries including France closing their borders with Britain owing to the new strain of virus, huge queues of lorries are building outside the country’s ports
AFP / BEN STANSALL


“The new… bill will help some workers and businesses get through the winter but it will do little to accelerate the arrival of an economic recovery,” said David Kelly, at JP Morgan Asset Management.

On currency markets, the pound was slightly higher than Monday’s lows, which were fuelled by concerns over the new virus strain and a lack of progress in Brexit talks.

But with just under two weeks until a deadline for an agreement, the two sides remain stuck on access to fishing grounds and there are worries Prime Minister Boris Johnson could walk away empty-handed.

There are hopes that his offer of a compromise on the fishing issue could break the deadlock, though French Europe Minister Clement Beaune warned: “There have been successive proposals from the UK, sometimes on fishing, that don’t respond to European priorities and demands.”