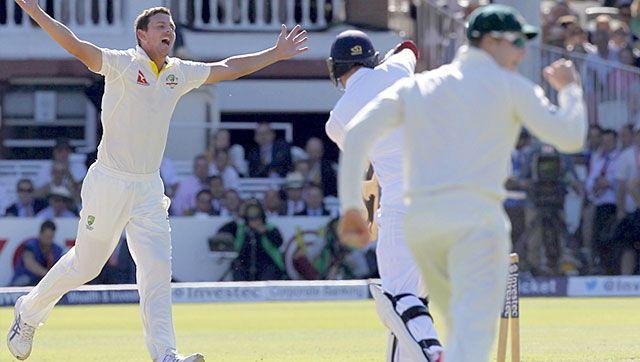 A rampant Australian pace attack ripped out a feeble England for 103 to seal a crushing 405-run win in the second Ashes Test at Lord’s on Sunday and level the series at 1-1.

It was Australia’s third-highest victory margin over England in Tests and England’s fourth heaviest loss by runs to any team.

After setting the hosts 509 for victory, the Australian quick bowlers carved through the top order to leave England in tatters on 64 for five at tea on the fourth day.

Out-of-form Ian Bell, on 11, was caught off bat and pad by substitute fielder Shaun Marsh at short leg and Ben Stokes was run out for nought in schoolboy fashion, failing to run his bat into the crease and as Johnson hit the stumps with a direct throw.

A snarling Johnson tore in to remove Jos Buttler for 11 with the first ball after tea and Moeen Ali for a duck in the same over.

Buttler edged another catch to Nevill, his fourth of the innings in his debut Test, and Moeen was caught at short leg by Shaun Marsh as he fended off a short delivery.

Stuart Broad clubbed a few boundaries to get to 25 before swatting Lyon straight to Adam Voges at extra cover.

Joe Root, on 17, was bowled by Josh Hazlewood, the ball keeping low and jagging back, and the tall pace bowler repeated the trick to dismiss James Anderson for a duck and spark wild celebrations from the jubilant Australians.

England won the last two Ashes Tests at Lord’s in 2009 and 2013, having previously failed to beat the Australians at the home of cricket since 1934.

The touring side had declared on 254 for two after piling up 146 runs in the morning.

The only concern for Australia was the retirement of Chris Rogers on 49 after the opening batsman suffered a dizzy spell.

The left-hander had added five runs to his overnight score when he signalled to the dressing-room that he was feeling unwell and, looking groggy, he was led off the field by medical staff.

It did little to disrupt the momentum of the Australians, however, as David Warner and man-of-the-match Steve Smith made hay in the sunshine.

Warner struck 12 fours and was closing in on a century when he was well caught at short cover by Cook off spinner Moeen for 83.

Smith, who made 215 in the first innings, plundered 58 off 48 balls including nine boundaries to continue his remarkable run of form.

The right-hander came up with some outrageous improvised shots and hit Broad for three successive fours before he charged down the pitch to Moeen and was bowled for 58.

Michael Clarke (32 not out) and Mitchell Marsh (27 not out) lashed a few more boundaries before the declaration.

The third Test, at Edgbaston, starts on July 29.

Australia skipper Clarke said he could not have asked for a better performance from his team.

“The intent from our batsmen through the second innings was great and the execution from the bowlers was spot on,” he said at the presentation ceremony.

Australia had lost the first Test in Cardiff by 169 runs.

“We didn’t really talk too much about Cardiff,” Clarke said. “Our focus was playing our best cricket here. We didn’t play our best there, but now we can look in the mirror and say we played some good cricket here.”

Australia made two changes to their side after the Cardiff loss, bringing in all-rounder Mitchell Marsh for out-of-form Shane Watson and wicketkeeper Nevill for Brad Haddin, who withrew for personal reasons.

“Mitchell Marsh played really well,” Clarke said. “He showed how much of a team player he is. He took two crucial wickets in the first innings. Credit to the selectors for going with their gut. It was hard on Watto (Watson), but the selectors have to work out the best 11 for each game.”

England captain Alastair Cook did not try to hide his disappointment at failing to build on the stirring win in the first Test.

“To not back up our win at Cardiff is incredibly frustrating,” he said. “Credit to Australia, they put us under pressure and we weren’t able to deal with it,” he added.

“We didn’t bowl with the same discipline and control. Over the last few games, we have been three down for 40-odd and that is an area of concern.

“We have to take this on the chin. Now it’s about the character we need to show to bounce back. We came up short this week.”

Cook said the problem was not with England’s batting order. “I don’t think it’s about where people bat, it’s down to the players, they just have to get stuck in,” he said.

“You’ve seen over the last eight days that the side which gets on top stays on top. Credit to Australia for getting ahead of the game and never letting us back in.”

Cook denied asking the Lord’s groundsman to prepare a flat lifeless pitch to negate the threat of the Australian pace bowlers. “We haven’t asked for wickets to be like this, we want good English wickets with a little bit in them,” he said.