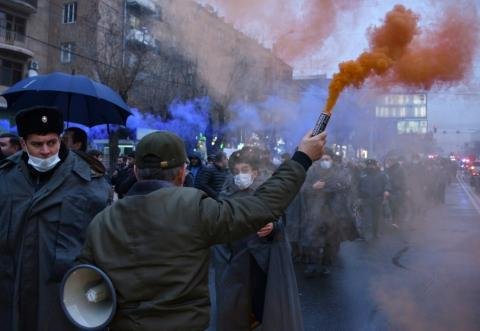 Demonstrators in Armenia blocked roads on Monday and forced Prime Minister Nikol Pashinyan to cut short an official visit, as anger in the country grows over a contentious peace deal with Azerbijan.

Pashinyan has come under pressure from the opposition to resign after agreeing to the peace accord with Azerbaijan that saw Armenia cede swathes of disputed territory after a brief conflict.

Six weeks of fighting between the ex-Soviet countries for control of the Nagorno-Karabakh region erupted in late September and left more than 5,000 people dead.

Government critics say that new border demarcations in the south of the country are being drawn at the expense of Armenia’s national security — a claim Pashinyan has denied.

The prime minister on Monday was travelling to the south of Armenia on the final day of a three-day national mourning period.

He said he did not want to resort to force to continue his journey after protesters blocked roads to prevent him from travelling.

“I am returning to Yerevan,” he wrote on Facebook, referring to the Armenian capital.

Pashinyan, 45, met with residents of the southern town of Sisian but protesters barred him from travelling to Goris and other towns.

Arushanyan was later detained by police, a representative told AFP, in an incident the mayor’s lawyer described as “an abduction”.

A spokeswoman for the national Investigative Committee told AFP that investigators had opened several criminal probes.

Clashes over Karabakh ended in November with the Moscow-brokered peace agreement that saw Azerbaijan with Turkey’s military and political backing make decisive gains in the disputed territory.

The opposition has branded Pashinyan a traitor for agreeing to end the war on Azerbaijan’s terms and has insisted that he stand down.

Nagorno-Karabakh declared independence from Azerbaijan during a war over the mountainous province in the 1990s that left tens of thousands dead.