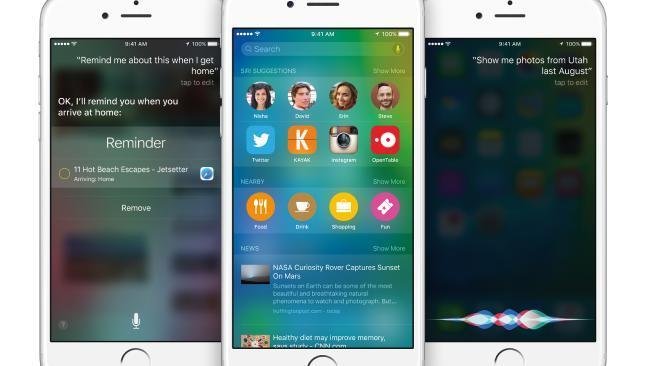 IT might seem like a bit of magic with smoke and mirrors to many iPhone users but Apple’s newest trick is more exciting than seeing a magician pull a rabbit out of a hat — and then that rabbit sawing someone in half.

Later today Apple releases iOS 9, the upgrade operating system for iPhones and iPads, and one of the most loved features is likely to be one that doesn’t change the stuff you can do with your device, but just lets you do that stuff a lot longer.

It’s not revolutionary to mobile devices, but the battery saving options with iOS 9 are likely to be loved regardless.

Apple has tweaked its software to be less power hungry and has added a Low Power Mode to further extend the life of the battery.

Joanna Stern of The Wall Street Journal previewed the battery-saving powers of the software tweaks and new Low Power mode. For her tests, she ran an existing iPhone 6 (not the new iPhone 6S coming on 25 September) through a test that involved looping through websites.

The results was an existing iPhone with iOS 9 got an extra 40 minutes of battery life. But the real boost came with Low Power Mode.

Turning on the Low Power Mode when the phone’s battery reached 20 per cent gave an extra 40 minutes of battery life by dropping the screen brightness and disabling some background tasks. Turning a phone on to Low Power Mode for the entire tests pushed an iPhone 6 running iOS9 to a battery life of 11 hours and 38 minutes compared with 8 hours for a iPhone 6 running iOS8.

Apple users are much more likely to upgrade their mobile operating system than Android users.

Mobile app analysts Crittercism predicts that within four days of its release, 20 per cent of Apple users will have upgraded to iOS9 — matching the upgrade rate of what Android Lollipop has achieved in 11 months.

For Australians, Apple will begin rolling out the free update late today and into tomorrow. And the good news is that the download requires you to have 1.3GB of free space, which is far less intrusive than the 4.58GB the previous update rudely demanded.

And if a better battery life for your iPhone isn’t enough to make you upgrade to iOS 9, here are five more reasons to embrace the new operating system:

* Meet split screen apps. If you have the latest iPad Air 2, you can split your screen in two so you can work on two apps side-by-side. If you have an older iPad, you can have a panel on the side that takes up one third of the screen, handy for viewing things such as email or notes while you’re working on another app.

* Notes has got a welcomed improvement. You can now embed photos in notes, do a sketch with your finger, or use it to store attachments from your email to easily find them later. Notes now synch across your devices with iCloud.

* Settings become easier to use. If you’ve ever lost yourself in the various levels of settings menu, you can now just type a word into a search field at the top of the settings app. While you’re in settings, go to Battery to now see what apps have been chewing up your battery power in the past six hours or four days.

* Siri has been given a makeover so now she’s smarter (and still just as sassy). If you have thousands of photos on your phone, Siri now finds them in a snap. Saying “show me pics from Canberra” for us instantly brought up all the photos we took on the last family road trip. It doesn’t have to be a city — saying “Show me pics from the Big Banana” worked just as well.

* If you need help, swipe to the right. Starting at the home page, a swipe to the right now brings up a new Siri suggestion page that has contacts you most recently called, apps you recently used, news and a search field. Siri will keep track of the time of day you use apps — so if you start your day by opening Twitter Siri will prompt that app at this Proactive screen. You’ll also notice a big change when you double press the home button to see what apps are open. Now you have full-screen cards — and you still swipe up to close them.

* It’s the simple things in life that are often the best. Go to type a message or email and the letters on the keyboard are in lower case or upper case depending on you touching the shift key. Such a simple change but already our favourite improvement.