Apple iPhone SE and iPad Pro: What you need to know 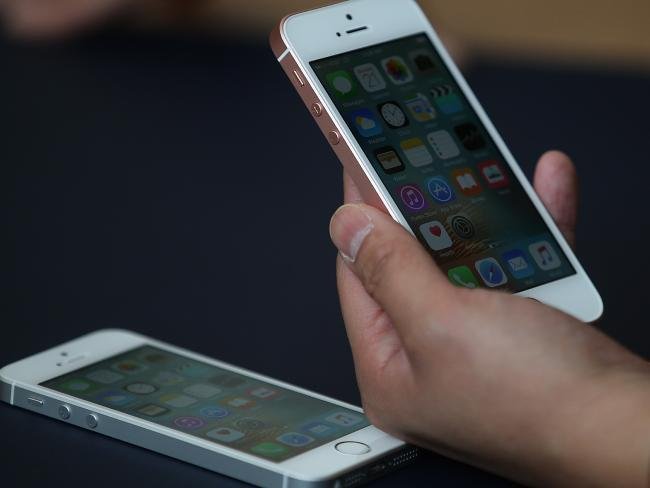 APPLE has returned to its roots, launching a new iPhone and an updated version of the iPad Pro.

CEO Tim Cook unveiled the iPhone SE calling it “the most powerful 4-inch phone ever”.

It has an Apple A9 chip, which is the same processor as the iPhone 6S and double the speed of the iPhone 5s.

The iPhone SE has a 12 megapixel camera with Focus Pixels and True Tone flash.

The phone, which looks similar to the iPhone 5s in style, has Touch ID and has NFC to use Apple Pay. It can also shoot 4K video.

Side by side, apart from the screen size and physical form, about the only difference between this and the iPhone 6s is the bigger phablet has the ability to use 3D Touch.

The Apple iPhone SE will be available in space grey, silver, gold and rose gold metallic finishes in 16GB and 64GB models from $A679 inc. GST.

Pre-orders start Thursday, March 24 and the phones will be available in Australian stores from Thursday, 31 March.

Phil Schiller, senior Vice President of marketing, announced the iPad Pro with a 9.7-inch display. The new iPad has the features of the 12-inch iPad Pro but in the traditional iPad size.

“The majority of people coming to an iPad Pro are coming from Windows,” he said.

The iPad Pro is powered by the A9X and has more graphics processing than an Xbox 360. It also supports “Hey Siri” so you can talk to your iPad and get it to read your messages.

Like the iPad Pro, it has an optional smart keyboard that attaches through the smart connector.

It is also the second iPad, after the original iPad Pro, to work with the iPad Pencil.

The iPad Pro comes in four colours, including rose gold, and comes in three models: 32GB, 128GB and a new 256GB.

The Apple CEO announced iOS9.30 with new features including the ability to secure notes with a passcode and improvements to CarPlay.

“Many many customers have asked for this (SE). I think they’re really going to love it,” he said.

Mr Cook also unveiled a new woven nylon band, that comes in a variety of bright colours, for the Apple Watch. There are also new sports and leather bands and new black band.

“About a third of our Apple Watch wearers regularly change their band,” he said.

Mr Cook also announced changes to Apple TV with a free update to tvOS including the ability to sort apps by folders and dictate using Siri to search the App Store and dictate passwords.

Apple CEO Tim Cook kicked off today’s iPhone launch with a bold statement in the fight against the FBI’s demand to create a back door into iPhone security.

“We need to decide as a nation how much power the government should have over our information and our privacy,” Mr Cook said speaking at an event at Apple headquarters at Cupertino.

“We did not expect to be in this position at odds with our own government.

“We owe it to our customers and to our country. This is an issue that affects all of us and we will not shrink for this responsibility.

“We have a responsibility to protect your data and privacy.”

Today’s iPhone launch comes a day before Apple is back in court fighting a demand from the FBI to create a backdoor into iPhone security.

The FBI is asking a court for the ability to hack into the phone of the San Bernardino shooter. Apple is fighting the demand, seeing it as the thin edge of the wedge into government surveillance.

Mr Cook used the event to look back at the past, with the technology company about to mark its 40th birthday next month.

“Normally we don’t spend a lot of time looking back but yes we are about to celebrate Apple’s 40th birthday on April 1st,” he said.

“It reminds us just how many times that Apple has changed the world.

“There are now more than one billion Apple devices in use around the world.

“This is an incredible milestone for us.

“For many of us, the iPhone is an extension of ourselves.”

Apple chief operating officer Jeff Williams talked about the impact of Apple Health and Research Kit which has been used by medical researchers to go beyond geographical boundaries and gather data from people around the world.

He said the technology had been used to create the largest Parkinson’s study in history in less than 24 hours.

“When we introduced Research Kit, our goal was simply to improve medical research.”

But they have found that the tools can also be used to improve care.

For instance, Parkinson’s patients can use their iPhone to track their symptoms throughout the day, helping medical staff to monitor the impact of their medication.

Apple launched CareKit today which will enable app builders to make apps specifically to help patients with their symptoms.

The first app launched today is for Parkinson’s patients and will be used by leading US medical centres from day one.

“We think the possibilities here are limitless,” Mr Williams said.

“A word on privacy. You decide which apps you use and with whom you share this information.”