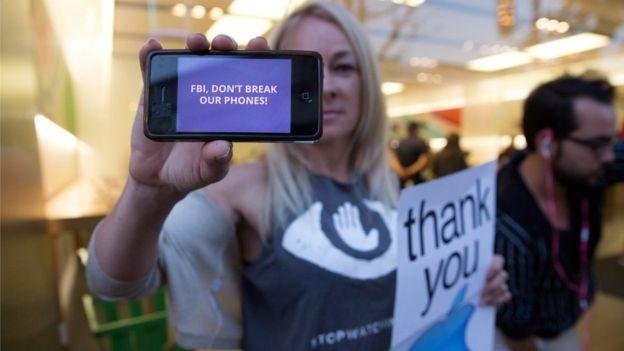 Apple boss Tim Cook has hit back at the FBI over the handling of a court order to help unlock the iPhone of San Bernardino killer Syed Rizwan Farook.

Mr Cook told ABC his company first learned of the controversial request when it was reported in the news media.

“I don’t think that’s the way the railroad should be run,” he said.

“I don’t think that something so important to this country should be handled in this way.”

However, a source close to the investigation told the BBC Mr Cook’s claim was “simply not true”, and that Apple’s legal team was “the first to know”.

A spokeswoman for the FBI said she did not wish to comment on Mr Cook’s remarks.

Elsewhere, the New York Times reported that Apple had begun working on an upgrade to its devices which would make it impossible to break into an iPhone using the method proposed by the FBI in this case.

Mr Cook was defending the company’s refusal to comply with the FBI’s order that it remove security blocks on Farook’s device so data on it could be accessed.

He said the FBI was asking the company to make “the software equivalent of cancer”.

Farook, along with his wife Tashfeen Malik, killed 14 people in the attack in December last year.

“I think safety of the public is incredibly important,” Mr Cook told ABC.

“The protection of people’s data is incredibly important. And so the trade-off here is we know that doing this could expose people to incredible vulnerabilities.”

The FBI has argued that Apple is overstating the security risk to its devices. FBI Director James Comey said Apple had the technical know-how to break into Farook’s device only in a way that did not create a so-called “backdoor” into every Apple device.

Conflicting polls suggest the American public is divided. One poll, by the Pew Research Center, suggested the majority of those polled sided with the FBI – although the researchers noted support for Apple grew among people who owned smart phones.

A Reuters poll, conducted by Ipsos, said 55% of respondents worried that the FBI would seek to use the backdoor to “spy on iPhone users”.