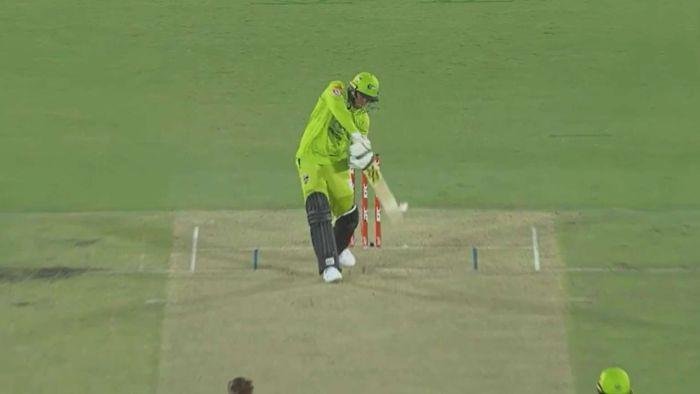 Mitch Marsh has become the latest player to back calls for a review system in the Big Bash after its absence was again exposed in the Sydney Thunder’s win over Perth.

Usman Khawaja survived an appeal for caught behind trying to drive Andrew Tye, with replays showing the batsman had clearly edged the ball.

Umpire Simon Lightbody could be heard telling Tye he believed Khawaja’s bat had hit the ground, despite the bat being nowhere near the turf.

On commentary, Mark Waugh could not believe the decision.

“It was nowhere near the ground. He’s just had a shocker there, unfortunately for the Perth Scorchers,” Waugh said.

Khawaja was on 18 at the time, and made just three more before falling to Aaron Hardie in the Thunder’s seven-wicket win over the Scorchers on Tuesday night.

But the decision reignited calls for a decision review system (DRS), after Khawaja was on the wrong end of another poor call nine days ago in the Thunder’s loss to Melbourne Stars.

Perth skipper Marsh was himself the victim of an LBW howler in the Scorchers’ washed-out clash with the Melbourne Stars last week.

“As a player you like to see stuff introduced, I would be all for it,” Marsh, who expects to be back bowling for the Scorchers on Monday against Adelaide, said.

“It’s probably above my pay grade to really be commenting on that. But I’d certainly be all for it if it was introduced.”

Money is believed to be the biggest hurdle for Cricket Australia, as AAP understands it would cost about $2 million to have DRS in place at all games.

While broadcasters do show ball-tracking technology, there are suggestions that would need to be improved while Snicko and Hot Spot are also currently absent.

However, the likes of former Australia captain Adam Gilchrist and Thunder skipper Callum Ferguson have argued a system where only replays were used would still be better than the current situation, without increasing costs.

Australia batsman Glenn Maxwell tweeted on Tuesday night seemingly backing a return to that style of system if need be.

“We get that umpiring isn’t easy!!” he posted.

“But surely with a stump mic, a bunch of different camera angles, and a basic understanding of cricket, the right decision could’ve been made without any of the fancy DRS bells and whistles?

“It was introduced to eliminate the howler.”

But Marsh believes it has to be a case of all or nothing.

“If you had just on-TV replays you would get rid of the absolute howlers but leave yourself open if there was really close calls,” Marsh said.