Akshay Kumar on Mission Mangal: I have done over 150 films, but this is one of my best

Megastar Akshay Kumar is extremely proud of his next film Mission Mangal, as it celebrates the Indian Space Research Organization scientists who made the country’s maiden interplanetary mission, Mars Orbiter Mission, successful.

Akshay Kumar launched the trailer in Mumbai along with the film’s star cast including Vidya Balan, Sonakshi Sinha, Taapsee Pannu, Kirti Kulhari, Nithya Menen, Sharman Joshi and H. G. Dattatreya The film’s trailer took the internet by storm upon its release, crossing 23 million views within the first 24 hours and has become a talking point on the internet.

Akshay Kumar spoke about how special this film was for him. He said, “”Mujhe nahi pata hai yeh film hit hogi ya nahi hogi. Lekin itna zaroor jaanta hoon ki we will always be proud of this film. And I’m very, very, very proud of it. Main kareeban 150 filmein kar chuka hoon and but this is one of the best films I have done”

“I did not have much knowledge about it (the mission). I got to know about it through my director. I learnt a lot through this film. Certain things were an eye-opener for me like Mangalyaan cost us just Rs 450 crore and NASA spent over Rs 6,000 crore”, he added further. 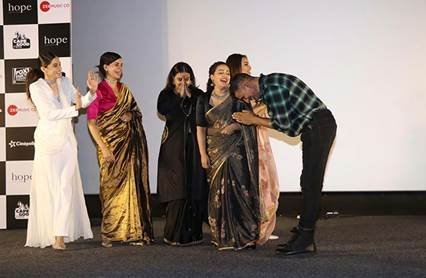 Figures in the media and celebrities alike applauded the amazing trailer, with stars such as Arjun Kapoor, Diljit Dosanjh, Riteish Deshmukh and Karan Johar, all praising the film and the starcast. 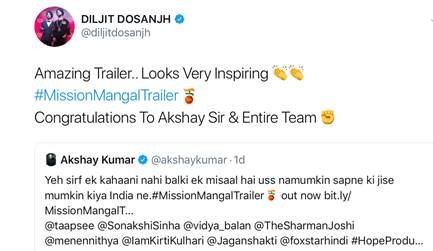 Mission Mangal is the incredible true story behind India’s mission to Mars. It shows how Rakesh Dhawan (Akshay Kumar) and Tara Shinde (Vidya Balan) together with a team of brilliant scientists successfully sent a satellite to Mars in their very first attempt, a mammoth feat achieved by no other nation.

The film is a tale of ordinary people doing extraordinary things and inspiring generations to dream big and achieve the impossible.

The film has been directed by Jagan Shakti and produced by Fox Star Studios and is slated to release on India’s Independence Day on 15th of August 2019.