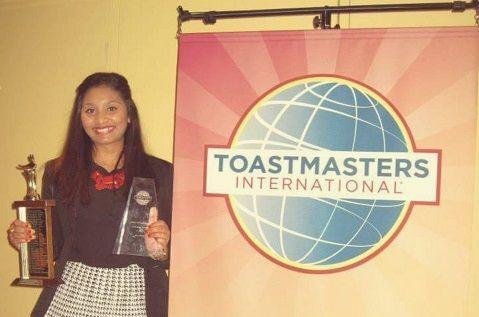 Doris David is a unique young woman, having recently won first place in the highest level of evaluation contest representing Holroyd Toastmasters Club at the District 70 Toastmasters Annual Conference. Doris is currently the best evaluator/public speaker in NSW/ACT, a special achievement for this talented 22 year old. The award is even more special, as Doris is one of only 7 women to ever receive this prestigious award since 1972.

Each club in Toastmasters holds an annual evaluation contest at which a target speaker presents and contestants have to listen, and then evaluate this speech. They are given five minutes preparation, and then have to present a thorough evaluation with constructive feedback for the speaker to improve, using various techniques. Doris competed in the final and highest level of Evaluation contest in NSW & ACT, and carried away the Award in first place. It is a tremendous achievement for this talented young lady.

Doris began public speaking since just 11 at her Bible studies group, but joined the Toastmasters Club at 18 to improve and enhance her natural skills. In Year 10, she was appointed as the Youth Ambassador of Blacktown, a role that involved speaking at citizenship ceremonies, representing the youth of Blacktown at conferences across Australia, and participating in debates and meetings. “I’ve learnt more about communication and leadership from the club that I could have ever imagined,” says an enthusiastic Doris. “I believe that more young people should become involved in the public speaking domain as the benefits of doing this will be intrinsically valuable for them in all walks of life,” she adds.

Doris was specially acknowledged by Councillor Stephen Bali, Mayor of Blacktown City Council at the Council meeting, for being the youngest and first to receive this prestigious award from the Blacktown Area. She worked hard to accomplish this achievement, but credits her parents and sister for their support, guidance and for steering her in the right direction.

Doris is studying for a Masters in Commerce at the University of Western Sydney and is also currently working, so naturally she has a busy schedule. However, this doesn’t deter the young woman from seeking more challenges. “My next aim is to represent Australia and become the World Champion of Public Speaking,” she states. “I want to ultimately become a motivational speaker, encouraging everybody to be the best they can be. Not many people know the benefits of public speaking and I want to make it my mission to encourage individuals in this field as the benefits are intrinsically valuable in all areas of life,” claims Doris emphatically, who believes that her talents and gifts can inspire others, especially the younger generation.

Doris is indeed an inspiration to her peers and to hopefuls within the Indian community. It is hoped that her achievement can motivate other young people to aspire towards realising their dreams and reaching their goals.