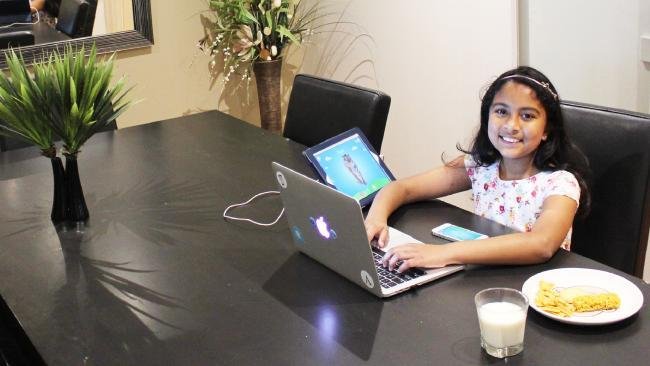 Apple’s 2016 Worldwide Developers Conference had a lot of big announcements, but Anvitha Vijay was the real star.

The exclusive showcase event hosts the most influential figures in the industry to show off Apple’s suite of software and technologies for the coming year.

Not long ago, those under 18 weren’t allowed to attend, but this year Apple invited about 120 scholarship winners to the conference.

While these included some of the brightest young minds from around the world, one name stood out among the rest:

Anvitha, the youngest of the scholarship winners, received a personal invitation to meet Apple CEO Tim Cook, and even received a shout-out at the start of his speech, pointing to her in the crowd and saying, “I met her and she is going to make one heck of a developer.”

So why is this Aussie kid being touted as one of the industry’s shining lights?

While you were figuring out how to tie your shoelaces, Anvitha developed and coded her first app at the ripe old age of seven.

She only had $130 in her piggy bank – not enough to pay a developer – so she taught herself how to code by watching videos on YouTube.

Since then she’s developed two apps that are now available on the App store.

Her first one, Smartkins Animals, teaches kids how to identify 100 different animals by using flashcards and sounds.

She told Fortune it was a difficult process to learn how to develop an app, because, well – she’s not even ten yet.

“Turning an idea for an app involves a lot of hard work,” Vijay said.

“There are so many components to building an app, including prototyping, design and wireframing, user interface design and then coding and testing.

“Coding was so challenging, but I’m so glad I stuck with it.”

For her next project, GoalsHi, she’s creating an app that helps children with setting and completing goals, time management, and teamwork.