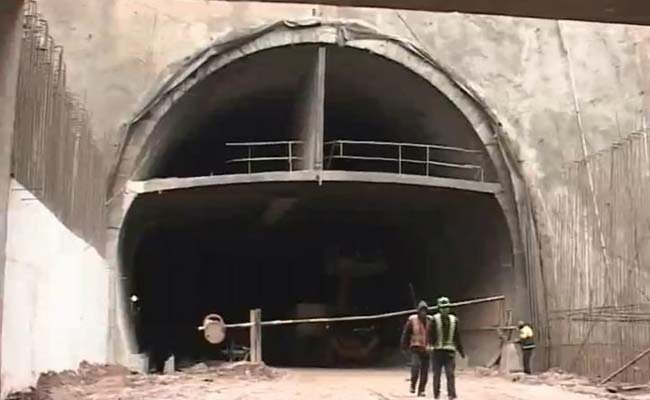 Srinagar:  India’s longest road tunnel – more than nine kilometres long and located on the Jammu-Srinagar National Highway nearly 170 km from Srinagar – will be opened for traffic in July.

The tunnel will connect Cheneni with Nashiri on the road between Jammu and Srinagar, cutting down the journey by 30 km and nearly an hour.

Being built at a cost of over Rs. 2,500 Crore across a highly seismic zone, the tunnel is dubbed an engineering marvel. There is a parallel escape tunnel along with the main tunnel for evacuation of commuters in case of an eventuality.

“There will be a crane on standby to toe away vehicles which break down. There are special compartments inside the tunnel which can be used by people in medical emergencies to alert the teams to reach the spot instantly,” said Atul Sharma, Environment, Health and Safety Engineer.

The tunnel is part of the 286 km long, four-lane, project of the Jammu- Srinagar national highway. It will pass through a patch of tough terrain, removing the biggest stumbling block on the highway and making tourist places along the highway like Patnitop more accessible.

“After the completion of the tunnel, Patnitop resort on the highway will emerge as a major tourist attraction, there won’t be traffic jams and tourists can reach there without any inconvenience,” said Rangrez Singh, Additional DC Udhampur.

The highway is the only road link connecting Kashmir with the rest of the country. But, the road remains mostly remains blocked during winters due to snow and landslides. The tunnel will help to reduce traffic jams and will be open even during peak winters. It is also expected to boost trade and commerce.