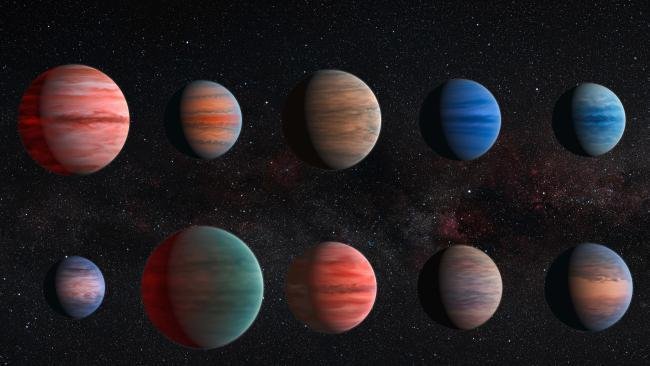 AS another year comes to a close, so does 365 days of space exploration.

Never before in the evolution of humankind have we explored the cosmos and made amazing discoveries quite like we did in 2015.

While the secrets of the universe may not have been unlocked, some groundbreaking discoveries were made.

In the landmark year of space travel, no topic was more exciting than the prospect of colonising Mars.

With NASA hoping to make this happen by 2030, a lot of time, money and recourses have been devoted to learning all we can about the red planet.

The biggest space finding of the year had to be the discovery of flowing water on the red planet.

Director of planetary science at NASA headquarters Jim Green made the announcement at a highly anticipated press conference in September.

“What we are going to announce today is Mars is not the dry, arid planet that we thought of in the past,” he proclaimed.

“Today, we are going to announce that under certain circumstances, liquid water has been found on Mars.”

Mr Green said the discovery changed everything humans knew about the planet.

“We now know Mars was a planet very much like Earth with warm salty seas, with freshwater lakes, probably snow-capped peaks and clouds, and a water cycle just like we’re studying here on Earth,” he said.

“But something has happened to Mars and it lost its water, but we still have in the atmosphere and on the surface for the most part.”

HOW NASA WILL GET HUMANS TO MARS

Following the announcement of flowing water, the space agency proved it was very serious about sending humans to Mars with the release of a document outlining its future plans.

“Mars is an achievable goal … We are developing the capabilities necessary to get there, land there, and live there,” the document read.

NASA’s document detailed a three-pronged approach to getting humans on the red planet.

The first stage, known as Earth Reliant, is focused on carrying out research on the International Space Station to test technologies and the ability to keep humans’ healthy in outer space.

NASA’s second stage, which has been labelled Proving Ground, will see the space agency conducting complex operations in a deep space environment between Earth and the moon.

This phase will be used to advance and validate capabilities required for humans to live and work at distances much farther away from Earth.

The final stage, dubbed Earth Independent, will capitalise on the findings from the previous phases and will allow human missions to the Mars vicinity.

It is hoped the space agency will be able to create “habitats that support human life for years, with only routine maintenance”.

THE DISCOVERY OF EARTH 2.0

While NASA might be taking a proactive approach to getting humans’ to colonise Mars, it hasn’t let other space exploration missions fall by the wayside.

The space agency has been using the Kepler Space Telescope to hunt for other Earth-like planets in our solar system.

Since launching the mission in 2009, NASA has made a number of big discoveries, however none came close to the announcement the space agency made in July.

Associate administrator for NASA’s Science Mission Directorate John Grunsfeld announced the discovery of the exoplanet, which was a close cousin to the Earth and our sun.

“This is about the closest twin to Earth 2.0 that we’ve found so far, and I really emphasise so far,” he said.

While the discovery of a second Earth that could play home to humans sounded promising, the reality was a little more harsh than expected.

Kepler research scientist Jeff Coughlin said the planet wouldn’t be inhabited by humans anytime soon as it was 1400 light-years away from Earth.

“You and I probably won’t be travelling to these planets — but our children’s children could be. This gives us something to aim for,” he said.

“One generation from now we might be able to get there. It gives humankind something to shoot for.”

AN ACHIEVEMENT NINE YEARS IN THE MAKING

How did we know?

“Locked! We have confirmation of a successful #Plutoflyby,” NASA tweeted.

The spacecraft, which is the size of a baby grand piano, passed within 12,500km of Pluto before zooming within 28,856km of Charon, Pluto’s jumbo moon.

Experts calculated there was a one in 10,000 chance of New Horizons crashing into debris as it entered the region beyond Neptune.

Thankfully, this wasn’t the case and NASA was able to use the probe to transmit images back to Earth several months later.

The images revealed an icy range about as high as The Rock Mountains, which scientists believed was formed no more than 100 million years ago.

Jeff Moore of New Horizons’ Geology, Geophysics and Imaging Team said the close-up region, which covers less than one per cent of Pluto’s surface, may still be geologically active today.

“This is one of the youngest surfaces we’ve ever seen in the solar system,” he said.

While the mountains were captivating, it was an the “heart” shaped area estimated to be 1,600 kilometres across that really got people talking.

IT’S NOT ALL GOOD NEWS

There might have been some huge discoveries in the cosmos this year, but they could all mean nothing if one prediction made in August is discovered to be true.

A team of astronomers from the Galaxy and Mass Assembly Survey said it had discovered the universe is slowly dying and there is not much we can do about it.

After analysing starlight from more than 200,000 galaxies, researchers found the universe is emitting far less energy than it once was.

Research Professor Simon Driver said the data showed the amount of energy being generated was as much as two times less than what was being produced two billion years ago.

“The Universe has basically plonked itself down on the sofa, pulled up a blanket and is about to nod off for an eternal doze,” he said.

“It will just become a very dark, very cold place where all matter will be a very long way from other matter. It’s rather bleak, I’m afraid.”

The good news is that the stars made to date will still last many billions of years, so the end of the universe is still a ways off.

ARE WE ALONE IN THE UNIVERSE?

While it technically doesn’t begin until 2016, Russian billionaire Yuri Milner announced he will provide $AU136 million to the search for extraterrestrial life over the next decade.

With support from renowned physicist Stephen Hawking, the Breakthrough Listen initiative will be the most intensive scientific search ever undertaken for signs of extraterrestrial intelligent life.

The project will use some of the biggest telescopes on Earth to search deep into the universe to locate radio spectrum and laser signals.

Speaking at the launch event at the Royal Society science academy in London, Mr Hawking was confident the mission would be a success.

“In an infinite universe, there must be other occurrences of life,” he said.

“Either way, there is no bigger question.

“It’s time to commit to finding the answer, to search for life beyond Earth. We must know.”

Making this announcement even more exciting was the fact Australia will play a lead role by offering use of the CSIRO Parkes radio telescope.

While supercomputers, Russian millionaires and aliens made for an intriguing combination, Project leader Matthew Bailes said the hunt would be challenging.

“Searching for aliens is difficult because we don’t know what we are looking for,” he said.